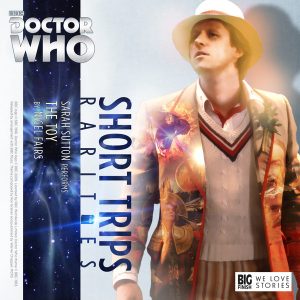 Things I learned from listening to The Toy:

Believe it or not, character development wasn’t really something Doctor Who did thirty years ago, so companions often appeared to be little more than ciphers.  I remember Fifth Doctor companion Nyssa as being petite, delicate and incredibly intelligent, but…well…I could never decide if I liked her. You see, she never really did much, and seemed to spend a lot of time off screen, fixing things in the TARDIS or resting.  At the time, with three companions fighting to share screen time, it felt as if I was watching a teen soap opera rather than a science fiction programme, and I guess that juggling such a large cast of regulars left little space or time for character development. This is a great shame, as there was real potential in Nyssa, who enjoyed more of an intellectual and spiritual bond with the Doctor than most companions, which (sadly) was never really explored. The latest entry in the previously subsrciption-only series of Rarities stories, The Toy goes a long way towards filling in some of those gaps in her character.

The Toy starts in her bedroom on board the TARDIS, where Nyssa dreams of her home, and something called a Forbidden Archway that never existed…or did it? On awakening, Nyssa leaves her room, and finds a flight of steps, a door marked ‘keep out’, and beyond, a locked room full of secrets, in particular a casket containing a jewel that seems to call to her. Literally.

So begins a journey that takes Nyssa from snow-capped mountains to vast cities, and introduces her to people she seems to know so well. What dangerous landscape has she wondered into — and can she ever escape to safety, and the comfort of her travelling companions?

Nigel Fairs, I would like to thank you for finally giving us a cracking thirty minutes and a properly three-dimensional character in Nyssa. And Sarah Sutton – you know how to read a story. Thanks to both of you I can now say that I have an opinion of our favourite surviving Trakenite. And I like her. I like her a lot. Bex Ferriday