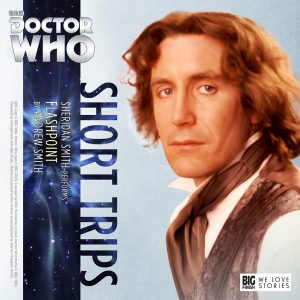 Lucie Miller always was the kind of girl who wouldn’t let something like death stand on the way of a good adventure. While it’s true that she is technically dead, thanks to the wonders of time travel, hypothetical fiction and the myriad of possible Doctor centric escapades that she was almost certainly involved in before she met her end, there’ll always be another yarn for her to spin or tale to tell of her days aboard the Tardis. And thanks to her becoming a firmly established, and most welcome, part of Who mythology during the time she spent travelling through the vortex in that strange blue box, there’ll always be an eager audience ready and waiting to hear and experience her latest story. In Flashpoint, the latest chapter of her space based history; she’s forced to protect a young boy from a criminal gang hell-bent on killing the child in revenge for the “perceived” sins of his father. Having been attacked while visiting a space station, and then made to flee in a life pod when said station succumbed to the assault, Lucie determines to protect her new ward, whatever the cost may be, as they “land” on the surface of a storm ravaged world. Beset by Mother Nature and trying to stay one step ahead of their persecutors, Lucie finds that even when help supposedly arrives, she doesn’t know who to trust. All she knows is that she has to keep the child safe and that is what she endeavours to do. As the weather and their assailants draw ever closer, Lucie batons down the hatches and prepares for the worst. But as anyone who has ever crossed paths with Lucie Miller will happily tell you, she’s at her best when her back is against the wall and she’s not, as her new enemies discover in Flashpoint, the easy target that she appears to be.

Andrew Smith’s guns blazing thriller brings elements of Witness, Mercury Rising, High Noon and Cohen & Tate to the Whoniverse and in the space of thirty three minutes manages to tell a taut, gripping and exciting tale that reinforces the idea that you should never judge a book by its cover while examining the lengths a beloved companion has to be pushed to in order to commit a mortal sin. Narrated and performed by the ever dependable and always excellent Sheridan Smith returning the fold as Lucie Miller, Flashpoint is easily among the top ten things you can spend your time indulging in for half an hour while fully clothed and sober. Yes, it really is that good…  Tim Cundle