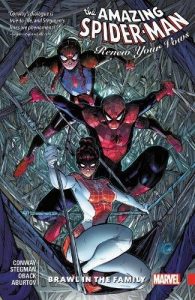 So somehow, in between saving the world, constantly trying to deal with J. Jonah Jameson’s demands and tantrums and continuing to successfully play the role of everyone’s favourite friendly neighbourhood Spider-Man, Pete managed to settle down with Mary Jane and start his own family, becoming a husband and father as well as being New York’s sworn arachnid powered protector.  As someone who can barely function before nine in the morning and his third cup of coffee, I don’t know how he did it (and maybe the super-powers helped, but I seriously doubt it), but he did; and in Brawl in the Family Pete and his nearest and dearest go on their first “successful” mission together facing off against the Mole Man and his minions, who is, as usual attempting to subvert humanity and make it bend its knee to his subterranean will.  While their escapades battling the below ground forces of the myopic megalomaniac are packed with all of the usual witty one-liners and spectacular spider action that we’ve come to know and love from Spidey, the real meat and potatoes of this book lies in the ever evolving Parker family dynamic. The relationships between Pete, MJ and Annie, their daughter, are what lie at the core of the story, as Spider-Man desperately tries to come to terms with the fact that he’s not a one-man show anymore and MJ and Annie struggle to become heroes in their own right while proving themselves to Pete and, well, themselves.  Oh and then there’s the whole Osborne sub-plot that’s quietly bubbling away in the background and getting ready to strike at some point in the future. It’s the kind of moustache twirling, long game insanity that’s par for the course with Norman’s clan, but it’s given an unexpected twist in Brawl in the Family which Gerry Conway handles as only he can, in tried, tested and true web-head fashion.

And speaking of Mr Conway, he should be strutting around wherever he is right how like the King among mere mortals that he is, as he’s pulled off what I thought was going to be an impossible task with ease and swaggering confidence. See, it would have been easy to let this book descend into so much unnecessary syrupy, over emotive, sugar coated schmaltz, turning it into a Walton’s style light soap opera in which Spider-Pa knows best the women folk just have to do as they’re told, but Conway doesn’t let that happen. The trio are given equal billing and MJ and Annie emerge from the admittedly large shadow cast by Pete, in high flying, web slinging, wise cracking style and so much so, that at times you nearly forget that this is a Spidey tale and keep glancing back at the cover to make sure that it is and that it hasn’t somehow transformed itself into a Spinneret (Mary Jane) or Spider ling (Annie) book while you were lost in its pages. Then there’s Stegman and Stockman, who with a flourish of their pencils and inks create the fantastically detailed word in which Brawl in the Family plays out and without whom it wouldn’t be half the book that it is. It would still be good, but it wouldn’t be great, which it undoubtedly and most reassuringly is. And yes, it’s still Spider-Man, just maybe not as you know it. But that’s a good thing. At least it is in this case… Tim Cundle