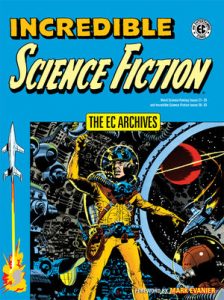 Incredible Science Fiction magazine’s first issue was actually issue #30, issues 1 – 29 were titled Weird Science-Fantasy (which in my opinion is a waaay cooler name). Dark Horse have reprinted here issues 27-33, originally printed in 1955/1956, fully remastered in digital colour and featuring stories and art from such industry stalwarts as Wally Wood, Al Feldstein, Jack Oleck, Joe Orlando and Al Williamson. Although why they went with the Incredible Science Fiction title when Weird Science-Fantasy was equally viable, I will never know.

Incredible Science Fiction is notable in the history of comics though.  Due to the infamous Comics Code that was introduced in 1954 to censor the ‘controversial’ comics at the time, most of EC’s comics output was under scrutiny.  A story in issue 33 did not meet the Code’s standards so publisher Bill Gaines and editor Al Feldstein decided to reprint a story called Judgment Day from Weird Fantasy #18.  This also ran into trouble from the Code administrators who disapproved of the story depicting a black astronaut (the story itself carried a strong anti-racism message).  Gaines threatened to go to the Supreme Court to get the story published as intended and the Code backed down, but Gaines could see how things were going and left the comics industry soon afterwards to concentrate on Mad Magazine.  #33 was the final issue.

So you probably have a reasonable idea of what you’ll be getting here – 1950s science fiction so it’s space ships with fins, robots, fish-bowl helmets and giant alien monsters.  But you get so much more.  Ignoring the visual style, the actual ideas presented in these tales of adventure are timeless, presenting themes and concepts as relevant today as they were at the time.  Stories dealing with the folly of mankind’s violent warmongering ways; of human bigotry and distrust of the new and different; classic adventure yarns; and even romantic tales of love conquering all.  As Dark Horse is committed to do with these reprint collections, the entire originals are reprinted so you even get the ads and letter pages as well as an excellent introduction by Mark Evanier.  In total there’s 20+ stories running to 230+ pages. There’s a handful of text only tales, but these are only a page in length and are worth reading, unlike many of the text ‘filler’ stories of the time.

In many ways these stories were published before their time, the concepts presented being as alien to the 1950s audience as the creatures depicted within although in fairness, the majority of the stories concentrate on humanity and not extraterrestrial threats.  Some of the stories are scarily relevant to today, with one in particular depicting a future where the education of the masses is restricted to such an extent that all literature has been destroyed and there are only 2 books – ‘Things You Can Do’ and ‘Things You Can’t Do’. With the attitudes currently being demonstrated towards education, especially in the States, how long before something similar takes root there?  Of course, the internet hadn’t been predicted then, but the concept’s still valid; what if the internet was ‘switched off’?  Or all content was government controlled?

But I digress.  The stories are great, but what about the art?  Obviously this was the 1950s so the design of the spaceships etc are what I will term ‘delightfully retro’.  Sleek missile shaped things with tail fins and bubble style cockpits. Bright yellow space suits with fish bowl helmets.  And, despite the variety of artists involved, all wonderfully depicted.  The reproduction here is excellent, undoubtedly never looking as crisp and colourful on its original printing.  The covers are a particular delight, every one worthy of being either a poster on your wall or a t-shirt on your chest.  This reviewer has no complaints.

So, great stories and great art.  If you have even the slightest interest in science fiction go get yourself a copy.  Paul Ferriday