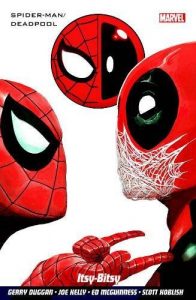 Pete and Wade, sitting in a tree, F-I-G-H-T-I-N-G… Relationships can be tough at the best of times, but when it comes to the bond that unites the Marvel Universe’s perpetual odd couple, Spider-Man and Deadpool, well most of the time, it’s close to snapping into a million tiny threads as they veer between being best buds and wanting to kill each other. Figuratively in Spidey’s case and almost certainly literally as far as Deadpool is concerned.  See, most of their problems can be traced back to one overwhelming factor that it’s kind of hard to get past and move on from. And that’s the fact that Wade is crazy and Pete isn’t.  It’s a nearly impossible hurdle to get over, but try as he might to avoid having to leap it, Spidey always does the right thing and never leaves Deadpool hanging; and in this latest collection of their one shot adventures, things go from weird to full-on fruit loops fuelled insanity in less time than it would take Wade to hack a room full of Hydra’s worst agents into teeny tiny pieces.

Whether they’re being played for fools on the set of the latest big studio superhero blockbuster in the plastic but fantastic land of Hollywood, dealing with and saving hippies and politicians on the – all too rare – right side of history from the machinations of the uptight prim and proper moral guardians of sixties American values or falling for Penn and Teller’s switcheroo and ending up as the rubes in the magical duo’s routine, Pete and Wade – with a little help from each – other always pull together and bring the bad guys in to meet the jail cell embrace of justice. Sort of.  Ish. While those three tales would, in their own right, be more than worth the ticket price to a front row seat in the ongoing Spider-Man and Deadpool saga, Side Pieces offers up extra fan incentives and a little more bang for your buck. Like the seriously hilarious, wet your pants and so have to excuse yourself from the room while you find a dry pair, laugh out loud funny story of how our chums discover the true meaning of Christmas and how the sorcerous plans of a bunch of Canadian High School girls ensure that the heroic super-pals end up saving Toronto from a Lovecraftian monster that descended to Earth from beyond the stars and may or may not resemble a vegetable that’s commonly used in moussaka.  Albeit a giant version of the aforementioned ingredient that’s all teeth, tentacles and bad attitude.

That’s right folks, the gathering of unusual suspects (well, some of the usual ones are present, but for the most part, it’s the writers that you wouldn’t suspect of being involved, that you’ve to keep an eye on, and out for, in Side Pieces) responsible for this tome must have had a free pass from the gods of the four colour universe, because each and every story is stone cold classic. There’s no drop in the quality-o-meter, as the art and writing is super-dooper, high fives to the sky awesome from beginning to end and the only thing you want to do when you do get to the end is go right back to the start and read it all over again.  While none of the stories in Side Pieces will alter your world perspective or make you rethink your life, the dysfunctional, villain smashing, arse kicking exploits of the strangest  of super-friends that it’s made up of will make you laugh until your hurt and provide a brief and incredibly welcome window of escape from all of the nonsense that the real world is permanently bogged down in.  Pete and Wade rule. And so does Side Pieces… Tim Cundle