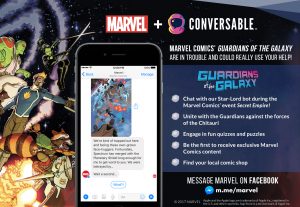 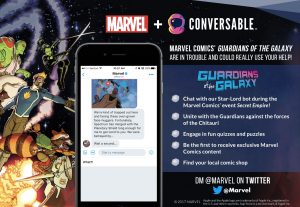 Today, Marvel is excited to announce the launch of our second wave of Marvel Universe chatbots, this time offering a front row seat to the ongoing comic event SECRET EMPIRE – through a cosmic lens! Now, fans can converse with the LEGENDARY STAR-LORD and the GUARDIANS OF THE GALAXY to see what Marvel’s spacefaring heroes are up to during Hydra’s takeover of Earth! Directly in-universe with the events of SECRET EMPIRE, fans will have the ability to chat with some of their favorite Marvel Super Heroes and play their own part in the Marvel Universe through Facebook Messenger and Twitter DM. Powered by Conversable, our new chatbot experience presents a bold and exciting way for fans to gain a frontline perspective to the most recent events in the Marvel Universe, as well as unlock exclusive content featuring the GUARDIANS OF THE GALAXY!

Our second launch in support of the SECRET EMPIRE event, the Guardians of the Galaxy chatbot is chock full of Easter eggs! Be sure to converse with Star-Lord using many an emoji, particularly those that are outer space and cosmically themed! Fans will also be able to engage in fun quizzes & puzzles, receive exclusive first-looks, and find their local comic shops.

“Marvel will always be on the forefront of exciting new ways for fans to experience the Marvel Universe,” said Julie Gerola, VP/GM Marketing & Digital Operations. “We are so excited to introduce a new way for our fans to engage directly with some of the Marvel characters during the events of SECRET EMPIRE and have the added ability to have their local comic shop’s location sent directly to fans so that they can further explore the entire Marvel Universe.”

“Marvel is spanning the physical and the digital in a way that brings fans and their superheroes together from all corners of the Universe. With the Guardians of the Galaxy chatbot, following the release of their Spider-Man chatbot, Marvel’s fanbase is truly able to build their own adventure with the characters of Marvel,” said Ben Lamm, CEO of Conversable. “Most importantly, Marvel is committed to meeting their fans where they are. Conversational intelligence is the perfect tool to continue to build loyalty and engagement, especially as new platforms expand and evolve.”

All of this, plus much more, will be delivered directly to fans’ mobile devices and desktops through Facebook Messenger and Twitter DM.* What words will you have for Star-Lord? What kind of Easter eggs will you uncover? (Remember, use those cosmic emojis!) And, after gaining an insider’s look, be sure to get in on the action of SECRET EMPIRE in comic shops now!