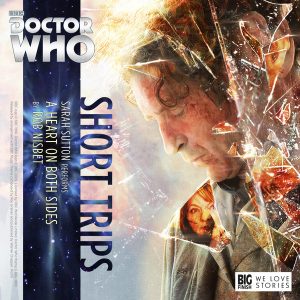 Doctor Who: Short Trips: A Heart on Both Sides – Written by Rob Nisbet & Performed by Sarah Sutton – Download (Big Finish)

“Nyssa is a good woman.”

A heart on both sides, excuse my pun, at its heart is a story of trust, and how war irrevocably changes it.

Long after Nyssa has left that traveller of time and space only known as the Doctor on the space station Terminus, she is practicing medicine on her own medical ship The Traken, assisted by her companion Doctor Foster. She has been traveling the galaxy trying to help those caught up in the last great time war until she lands on the planet Reeve, close to Galifrey. Reeve is of strategic use to the high council of the Timelords. Unfortunately the locals don’t approve of the Timelords taking control of their world which means any Gallifreyan on Reeve isn’t going to be invited to tea anytime soon.

Nyssa and her companion are drawn into local affairs when an explosion at the space docks means the medical facilities on The Traken come into their own. Ably assisted by a local, Doctor Isherwood a woman scarred by the darkness of war and her hatred for the Timelords, Nyssa and Foster begin to tend to the sick and dying. However, if I gave any more of the story away, it might spoil it, and I don’t do spoilers.

For fans of Big Finish who need to know if this retcons the future travels Nyssa takes with the Fifth Doctor, you have no need to panic. Everything is cleverly done in a way that retains the smooth(ish) flow of Nyssa’s timeline. And it doesn’t include mind wipes.

The narration, by Sarah Sutton is superb. Sarah has been gifted with one of those voices and I could listen to her read the yellow pages and it would still be a joy. The story is told in more of a Companion Chronicle style, which adds a very personal touch to proceedings, which in turn adds a whole new level of ambience to this story of war and the personal devastation it causes .

As I said in my previous review the Short Trips are nice bite sized stories designed to be consumed in a single sitting. And this one had me gripped from beginning to end and I’ll be returning to see if it contains any other continuity Easter eggs to link old Who with new. As a rule I don’t score my stories with numbers, however, I’m sure that A Heart on Both Sides will place very highly on everyone’s lists. “But Legeon” I hear you cry. “What of the Doctor? This is meant to be a Doctor Who Short Trip!!” If I were to tell you that, well, as a possible half Timelady of the future might potentially say “Spoilers”… Legeon Henderson