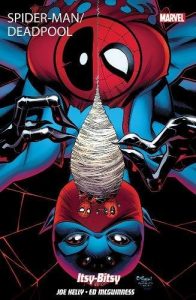 Teaming up and being part of a pugilistic partnership whose reasons for existence are twofold: fighting crime and protecting the public, seems to be an in vogue thing in Marvel’s Big Apple these days.  Frank Castle and Stephen Strange, Wade Wilson and, um, Frank Castle and now Wade’s chumming around with Peter Parker. It’s all about duos in the caped community at the moment. Although to be fair, this isn’t the first time that Spidey and Deadpool have stood side by side to do the superhero thing and they kind of are the progenitors of the trend, so as far as solo acts doing the teams of two thing is concerned, they do have the edge on everyone else. Besides, if there’s a more honourable, forthright and in it for the right reasons superhero* than Spider-Man out there, I’ve yet to stumble across her or him. Pete’s the guy who takes a kicking and keeps on ticking no matter what the odds; and as Itsy-Bitsy fires its opening salvo at our chums, it appears that Pete has finally broken through to Wade and encouraged him to turn over a new leaf, which has resulted in all sorts of personal transformation and change for Deadpool. What, a semi- psychotic and homicidal lunatic isn’t allowed to turn his life around? Come on folks, it’s the twenty first century and anyone can be whoever they want to be in this day and age.

And it’s while the newest bestest chums are pointing out the error of wrong-doers ways that Itsy-Bitsy the human arachnoid killing machine who claims to be made from a little bit of Pete and a smattering of Wade, makes her dark side debut. Which she does by beating the seven shades of you-know-what out of her “dads”, causing them to flee to a pocket universe** in order to escape her, before she sets about “cleansing” the city in a murderous rampage driven by her warped ideas of jurisprudence.  But she’s not in this alone, and is operating at the behest of a higher power; and as Itsy-Bitsy plunges the city into a maelstrom of mayhem, and as Pete and Wade become ever more desperate to stop her, everything is cranked to red-line and danger levels, as our heroes, their antagonist and her puppet-masters push each other to breaking point and beyond. Full of devilish scheming, Machiavellian duplicity, featuring an eye popping amount of fist swinging, bone shattering action and fuelled by dark vengeance, Itsy-Bitsy (literally) drags Deadpool and Spidey to hell and back.

Intelligent and incredibly well written, plotted, planned and executed by Joe Kelly and Ed McGuiness, the former responsible for creating the story and the latter in charge of crafting the stunning artwork that brings this magnificent monster to life, Itsy-Bitsy is one heck of a white knuckle ride. Questioning the core values and personalities of Deadpool and Spider-Man, it tears both men down, ripping them apart and rebuilding them in the face of seemingly impossible odds, while extoling the values of sacrifice and friendship and pondering the nature of change, Itsy-Bitsy is a book that you’ll need to read over again just to make sure that you don’t miss any of the thousand and one different ideas that Kelly has infused his story with, or any of the detail that McGuinness has forged into every panel and page. This is one team-up that you won’t want to miss… Tim Cundle

*Except for maybe Sam Wilson who is quite possibly one of the most righteous, stand up chaps in the Marvel Universe. And I would have mentioned Steve Rogers, but the whole Hydra deal put paid to that.

** It’s a story in, and of, itself and is worth the cover price alone.