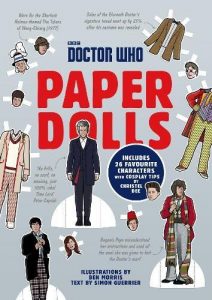 I know what you’re thinking. A multi-Doctor story featuring all twelve incarnations, several companions AND Petronella Osgood? Why, this is the sort of gold-plated fanwank usually reserved for important anniversaries!  And top title too. ‘Paper Dolls.’ Very cool. Very knowing. Tell me more…

…well, first of all, re-read the title. This review is literally about a set of 26 paper dolls. Yep – exactly like the ones you’d find in your, or your sister’s ‘Mandy’ and ‘Twinkle’ comics in the ‘70s and ‘80s. Remember how, with your uncoordinated fingers and blue plastic crocodile scissors you would cut out a 2D character, then clumsily hack away at a variety of fiddly, be-tabbed costumes to ‘dress’ said 2D character? THAT, ladies and gentlemen, is what I am reviewing.

I know what you’re thinking. Has the Doctor Who cash cow become so desperate to feed that it’s now trying to flog us tawdry cut-out-and-keep-crap? Well, no. This is far, far more than a cynical exercise in making money out of us fans. This is a gloriously vibrant work of art!

Paper Dolls is a book that reeks of quality before you even open its sumptuously cardboardy cover, and from the luxuriousness of the paper it is printed on through to the glorious art work, it’s a joy to behold. And my God, it’s robust. Your cut out Fifth Doctor is in no danger of crumpling after 5 minutes, so is quite unlike his televised counterpart. And while some of the likenesses may be better than others (Ben Morris has captured the twelve Doctor’s smile with eerie accuracy, but hasn’t been quite so successful with River Song, for example), without exception every page is a feast for the eyes.

But there’s more! Every character comes with two costumes and a variety of heads. I especially like the Third Doctor and his cleaning lady disguise from The Green Death. And each page also contains nuggets of trivia about the featured character and their costumes, along with quotes from the actors themselves. BUT THERE’S EVEN MORE! Christel Dee, she of the disarming smile and presenter of Doctor Who: The Fan Show kicks the book off with a lovely introduction to cosplaying and some tips for those of us who enjoy appearing at conventions dressed as our heroes. Though I used to know a bloke back in 1992 who dressed like the Third Doctor every day just because he liked Pertwee’s style. That’s dedication for you. A word of caution though. These are not perforated shapes that you gently press, wiggle and tease out of the pages, and with twelve Doctors, all the new Who companions (including my new-most-favouritist-companion-ever, Bill Potts), classic companions such as Jo Grant and Sarah Jane Smith AND fan-favourite, the aforementioned Petronella Osgood to hack into…well, that’s a hell of a lot of cutting out.

I know what you’re thinking. If it’s going to be such a chore, why bother? I won’t be cutting out these dolls. As tempting as it is to undress Matt Smith(!), this book deserves to remain intact. As I said earlier, it really is a work of art. And at a mere £12.99, it’s an affordable one too. Treat yourself to a bit of luxury. You won’t regret it.  Bex Ferriday