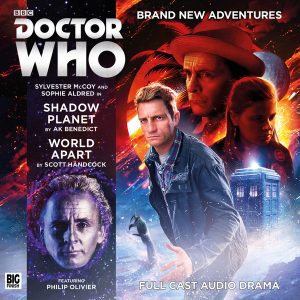 It’s been a while since we’ve ventured through the Time Vortex with the Doctor, Ace and Hex and given that I’m more than a little fond of this particular trio, the promise of them once again saving everything and everyone makes me a little more excitable than I normally am, as by the end of each of their stories, I usually need a bit of sit down, a cup of tea and a shot of whatever is close to hand.  The latter is, of course, purely medicinal, serving simply as a tonic to steady the nerves.  Shadow Planet / World Apart, a duo of linked tales, finds Hex, Ace and the Doctor confronting the possibility of, and coming to terms with, the idea of sentient planets. Organisms so vast and different that their motivational drives and undermining ideology and morality can barely be comprehended by the creatures that exist on their surfaces and are, perhaps, even beyond the understanding of the Universes premier self-confessed genius, the Doctor.

In the first offering, AK Benedict’s Shadow Planet, our well-travelled band of adventurers become sold on the idea of having their shadow selves removed in order to converse with them and by doing so, come to know themselves far better than they ever have before. But corporate greed and cost cutting have corrupted the original idea and distorted and nearly destroyed the shameful secret at the heart of the enterprise, and as usual, the Doctor and his friends arrive just as everything is about to go to disastrously wrong. Then, in Scott Handcock’s World Apart , Ace and Hex find themselves stranded on an impossible planet that even though it does, shouldn’t exist, or have any place, in reality. Combining elements of Brigadoon and Robinson Crusoe, it strands the Doctor’s companions in a situation that he even he might not be able to save them from, and serves as a perfect reminder that even the greatest of heroes can sometimes have feet of clay.

The central theme of sentience so rare that it’s alien even to the Doctor is an endearing and clever concept that both Benedict and Handcock use to its utmost in their radically different stories.  Exploring ideas of intelligence and how we view and perceive it and how the Doctors friends view him as opposed to the actuality of him and how he really is, Shadow Planet and World Apart have a nostalgic feel that harks back to the late eighties era of the Seventh Doctor’s adventures. And both are exemplarily performed by a stellar cast that revolves around, feeds off and draws its energy from the core triumvirate of the always excellent Sophie Aldred, Philip Olivier and Sylvester McCoy. I think I’m going to need that sit down and I know that I’m definitely going to need a tot or two… Tim Cundle