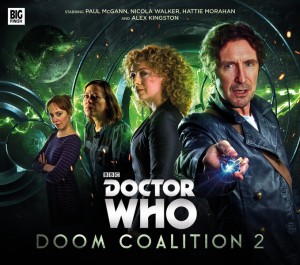 As much as the Doctor hops about in, travels through and throws the occasional tiny spanner into the machinery of time, his always well-meant interference is shaped by the knowledge that it is composed of a series of fixed events, things that should never be changed less the structure of the Universe itself begins to fall apart.  He would however, appear to be in the minority of “rogue” Timelords when it comes to be obeying the laws that his people have been governed by for countless millennia. Having already “butted heads” with, and made an enemy of, the Eleven in Doom Coalition, the Eighth Doctor, Liv Chenka and latest addition to the Tardis crew,  Helen Sinclair once again cross swords with him after stumbling across  the fallout from his infernal plans for the Universe; although this time the Eleven isn’t alone. He has a partner in crime. And as the circumstances that have brought the Doctor, the Eleven and his new “friend” together begin to gather momentum, it becomes increasingly difficult to ascertain who is the puppeteer and who the marionette, the Eleven or his even more demented, and deadly, ally.

Doom Coalition 2 is built around a series of intertwined stories that see The Doctor, Liv and Helen helping ward off an alien invasion while “holidaying” on the Cornish coast in Beachhead; confront the devastating reality of spending too much time in the space time vortex before discovering a new super-weapon in Scenes From Her Life; discover the truth about the San Francisco Earthquake of 1906 in The Gift; before finally, in The Soniomancer, coming facing their adversaries and getting a little help from an unexpected, but most welcome quarter, on a dying world.  In a tightly woven plot that bounces them throughout history and from one corner of the Galaxy to the next, it becomes readily apparent that the alteration of time and history is just part of a much greater plan, a grand scheme flexing one of its, doubtless many, appendages as it slowly begins to build toward its far more opulent and mortiferous finale.

The real beauty and charm of this series of Eighth Doctor adventures, much as in Dark Eyes before it, lies in the way that it is unafraid to play the long game, offering the audience fantastically strange and inventive individual stories that not only join to form an even greater whole, but also drip-feed and tease tantalising titbits about, and further clues to, the overall series arc. Doom Coalition 2 does all of the aforementioned, while also utilising, incorporating and exploring disparate themes and ideas such as the imposition of conformity and subjugation of individuality, the corruptive nature of power and greed, how even the greatest of intellects can be fooled by the simplest of disguises and trickery, the fallibility of man and woman and the consequences of ignorance. From the gothic splendour of a blasted, barely functioning vortex scorched Tardis to the fractured streets of early twentieth century America, to the seething fury of the interior of an alien volcano and, well, Cornwall, Doom Coalition 2 gradually increases its grip on it’s listeners with each and every twist and turn of its astonishing design.  It’s heady, intelligent, intoxicating drama performed by an exemplary cast and authored by writers with an innate understanding, and abiding love, of the Whoniverse. And it is absolutely wonderful… Tim Mass Movement