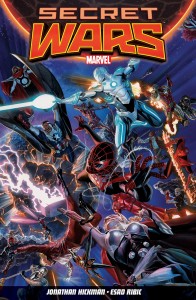 The four colour universe is no stranger to massive, life changing crossover events that draw all of its players and protagonists into encounters and engagements that shape mould and alter the course and purpose of their immediate surroundings, and even in some cases, the world itself.  However, while we, the audience have become increasingly used to their presence and the inevitable ramifications that follow in their wake, none have come anywhere near the unprecedented size and sheer scale of Secret Wars, the epic arc that acts as the culmination of the many tangled webs that master strategist, and scholarly purveyor of the literary long game, Jonathan Hickman has been weaving throughout the titles he’s been writing for nearly the last half decade.  While other writers are content to merely destroy cities, countries and continents, nothing less than the wholescale annihilation of the multi-verse and all of its facets is enough for Hickman. For his is the hand that put an end to everything and from the ashes of the old world, he has fashioned the new; one in which anything, and everything is now possible, and I imagine, where the restrictions previously imposed by mythology and canonicity no longer apply, or have any legitimate bearing.

The similarities between Secret Wars and Jim Shooter’s eighties story that bore the same name, which was arguably the first really big crossover event in the Marvel Universe, don’t just begin and end with the title and the inclusion of some of the same characters, as the same “villain” once utilises and binds powers beyond his understanding to further his own agenda. Although, this time, it could be disputed that his actions were, and are, shaped by a degree of altruism. Following the final incursion and the destruction of the Marvel and the Ultimate Universes, Doom with more than a little help from Owen Reese, the Molecule Man and Sorcerer Supreme, Steven Strange, harnesses the power of the Beyonders in order to fashion a new world from the remnants of all those that were obliterated during the cosmic collapse.  However, other minds also sought a way to escape the end, and built life rafts, ships that were caught in the maelstrom, but survived, carrying their cargo “safely” to the new world. Secret Wars is the story of what happens when those ships finally open, and let loose their passengers upon the “perfect” society created by the God, Doom, the saviour who all creatures owe their lives to, whose laws and word must be obeyed  and who must be worshipped on pain of death.  This is the story of how Victor’s utopia came crashing to its knees when Reed Richards was cast into it. Mr Fantastic’s presence, much like a like a new virus in a decaying vessel, chews his old advesaries kingdom to pieces, bringing an end to the Eden built by Doom while crafting something new, beautiful and filled with hope from its remains.

This multi-layered tale, full of incredible characterisation, interaction and plot development is a wondrous achievement. Blending hard science fiction, theoretical physics and fertile, fervent imagination, it’s a story of death and rebirth and of the way men see the world. How some seek to shape in their own image while others are content to let it develop at its own pace and find its own way.  The detailed feudal society that Victor creates, fashioned from his own experience and ideas, that’s so different and yet so similar to the Marvel Universe is phenomenal, seamlessly incorporating the cast of the “previous” universe, their presence lending it an air of instant familiarity, while the new roles they’re made to play grant it an air of mystery that completely draws the reader in. As with a lot of Hickman’s work, he uses the plot and character interaction to explore huge concepts, all of which are gorgeously realised by Esad Ribic. The interconnection of power and religion, the way both are shaped by individuals and circumstance and the price that’s ultimately paid by the representives of the opposing forces of freedom and authority, guide the players through, and fuel their actions in, this strange, new world. The core of the story though, is the rivalry and relationship that exists between Reed Richards and Victor Von Doom, and how it has forged them and their vastly different visions of life and how their emnity has helped give form to, and shaped, the Marvel Universe. Their endless competition adopting the guise of good and evil, acting as the fulcrum that keeps everything in check and balance. Remove Reed from the equation, and you get Victor’s world, remove Victor, you get Reed’s universe, as Doom focuses on only the immediate and Richards imagines the infinite. Take both men off the playing field, and you get something entirely distinct and disparate, something new. A new Marvel Universe. And this is the story of how it began… Tim Mass Movement