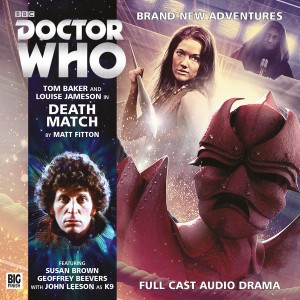 Doctor Who: Death Match – Starring Tom Baker, Louise Jameson, Geoffrey Beevers, John Leeson, Susan Brown, Damian Lynch & Andy Secombe & Written by Matt Fitton – CD / Download (Big Finish)
When last we left The Doctor (that is, the Fourth Doctor), he’d defeated the Rocket Men and The Master and Leela had elected to remain with one of their new allies Marshal in order to try and whip him and what was left of his rocket powered chums into shape and turn them into a force for good. At least that was what The Doctor thought was happening, but unbeknownst to everybody’s favourite time travelling hero, The Master wasn’t quite as beaten as he’d seemed, and he kidnapped Leela and made off for parts unknown. And so, with Marshal and The Doctor hot on their heels, the players are in place and the stage is set for ‘Death Match’, which means it’s time to raise the curtain and let battle commence.

Having caught up with The Master, The Doctor and Marshal discover that with a little inadvertent help from Leela, he’s now in charge of, and running, The Death-Match. It’s a free-for-all, gladiatorial style Battle Royale in which the warriors of the super-rich fight to the death in order to become the new Hunter, or Huntress, the ultimate champion of the contest. While their warriors fight, bleed and die, the rich bet on the outcome of each fight, winning and losing fortunes on the turn of an axe or at the tip of a blade, and with each fresh kill they fall further and further into The Masters trap. Well, you didn’t think The Master was there for the money did you? Knowing his oldest adversary only too well, The Doctor once again sets out to prevent his latest scheme, or at least he would if he wasn’t trapped in the game with k-9, Leela and Marshall and being hounded by an unstoppable armour clad knight with death on his mind. This time, the odds are stacked against them and if they have any hope of escape, a sacrifice is going to have to be made and someone is going to lose more than just the shirt off their back.

Forming the second half (the first part being ‘Requiem for the Rocket Men) of a loosely connected, but connected nonetheless, story ‘Death Match’ throws everything into the ring. There’s action, adventure, suspense, a wonderful “showdown” between The Doctor and The Master in a frantically plotted tale full of Machiavellian plotting and double dealing that culminates in tear-jerking finale that might have made me shed a tear where I not made of sterner stuff. Although I will admit, that to an outsider it may well have seemed that I was weeping a little, but it was just a fragment of dust caught in my eye, it is Hayfever season after all. Where was I? Oh yes, ‘Death Match’. First rate bit of pulse pounding drama, that thanks to the fantastic interplay between Tom Baker, Geoffrey Beevers and Louise Jameson, feels like it could have been part of BBC One’s Saturday tea-time broadcast schedule in 1978. Which is probably why I’m suddenly feeling incredibly nostalgic… Tim Mass Movement