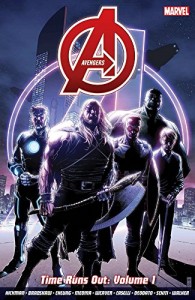 Avengers: Time Runs Out Vol. 1 & 2 – Jonathan Hickman, Jim Cheung, Paco Medina, Nick Bradshaw, Dustin Weaver, Kev Walker, Stefano Caselli, Valerio Schiti, Mike Deodato & Szymon Kudranski (Marvel / Panini)
It’s been said, although who it was that first postulated the idea escapes me, that the perfect story is a collision of big and small: gigantic plots and massive events juxtapose then the minutia that ties everything together; the characters, relationships and sub-plots that combine in harmonious symmetry to drive the requisite ingredients of the tale. These perfect stories work their way into your imagination, staying with you long after you’ve put the book down are rare, glittering jewels in an ocean of unpolished gems; and so when you stumble across them, you should hold on tight and read and re-read every page and every word because you never know when the next one will appear. ‘Time Runs Out’ is one of those tales, a story that’s both vast and complex, one that incorporates mind-bending ideas and plays out on a multi-universal, unimaginably huge field, but due to its incredible characterisation, attention to detail and belief in the tried and trusted knowledge that it’s the small things that make the world work, it’s also immediate, intimate and personal. And thanks to the near genius level ability and talent of the artists who have breathed life into every panel, it also looks fantastic. 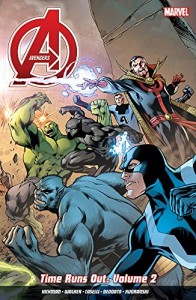 ‘Time Runs Out’, at its core, is all about the death of the Multi-Verse, the destruction of hundreds of Earth’s and the frantic efforts of all Earth’s (that is, our Earth, or rather the Earth on which the Marvel Universe is centred, which essentially is our Earth and… Oh, never mind, you get the idea) heroes and even villains, to prevent the destruction of their planet. Which is where they begin to diverge and splinter, as different coalitions and groups (the Cabal, the Illuminati, S.H.I.E.L.D and the Avengers) have different ideas about how to tackle the problem and It’s these ideologies, both long-standing and relatively recent, and the conflicts that they’ve caused and the way in which each tries to solve the problem that fuel the plot, while the rapidly evolving and ever changing friendships and alliances and the way in which the crisis has changed core-characters and turned friends into enemies and vice versa form the heart of the story. Suicide missions to the end of the Universe, a disintegrating Cabal, the Illuminati on the run, Steve Rogers slowly morphing into, and channelling, Nick Fury as he assumes his role, Iron Man’s disappearance, AIM switching sides and a plethora of twists, turns, surprise reveals and damn-I-didn’t-see-coming moments align to make ‘Time Runs Out’ a jaw-dropping spectacular.

It’s no secret that I’m a Jonathan Hickman fan, I’m a slavering, drooling mark for the type of concepts and ideas that are part and parcel of his work, his overwhelming faith in the intelligence of his audience and the meticulous planning that goes into everything that he does, but this, ‘Time Runs Out’, and his work on the Avengers, may very well be his master-piece. This is how you play the long-game in the four colour universe, and how you play it well. And you know what? It’s just the beginning… Tim Mass Movement