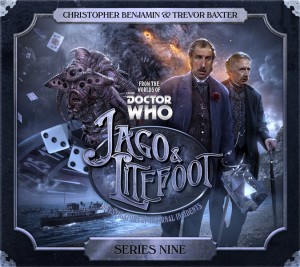 Jago & Litefoot: Series 9 – Starring Christopher Benjamin, Trevor Baxter, Conrad Asquith, Jamie Newall, Lisa Bowerman, Sarah Badel, David Charles, David Warner, Dan Starkey, Miranda Raison, Anthony Howell & Jonathan Coy & Written by Paul Morris, Simon Barnard, Jonathan Morris & Justin Richards – 5xCD / Download (Big Finish)
By Jingo, I think I’ve cracked it. It’s all down to magnetism don’t you know. No, no, not that confounded physics rot that makes a chaps noggin hurt whenever another chap starts talking about all that bally science mumbo-jumbo, none of that. Rather it’s all about personal magnetism, you know, like some poor souls on the battle field become bullet magnets while other fellows get away scot free, and some rum sorts always seem to attract the ladies even when a far more dashing and well-to-do Johnny is in the room. That’s the sort of magnetism I’m talking about, the sort that Jago and Litefoot, as far as infernal goings-on are concerned, have in spades. They attract trouble, and it seeks them out no matter where they are. Even when they set off on a first class cruise to try and get as far away from that sort of thing as possible, as they do in this rather splendid ninth series, it finds them and clings to them like clue. Poor old Henry and George. I’d feel sorry for them if I didn’t enjoy their adventures so much.

And talking of adventure, that’s exactly where they inadvertently find themselves bound for almost as soon as they leave harbour, as after less than a day at sea, they and the rest of the ship find themselves trapped in a dimensional nexus, a gateway to parallel worlds in which all strange manner of alternate versions of themselves exist. Almost as soon as their ship is back on course, our intrepid hero’s become involved in supernatural shenanigans, devilish doings and murder most foul in the casinos of Monet Carlo, before falling prey to a sinister cult and a foul Elder god and it’s servants while making repairs on a mysterious island and finally, just when they think the coast is clear, they end up face-to-face with an ancient demon, a monster invoked and sent to recover its rightful property from the sticky fingers of those who should have known better than to steal from other-worldly natives. Oh, and did I mention the rather ghastly discovery in London? The undercurrent that runs through each of these delightful dramas? I didn’t? Good. You know the drill. No spoilers.

Once again, Henry Gordon Jago and George Litefoot find their skills as investigators of the bizarre tested to the limits in another highly enjoyable and thoroughly entertaining series that adds a touch of the eldritch and a sprinkling of Lovecraftian mystery to the proceedings. The writing is spot on, filled with humour, knowing nods to all that influenced the superb plot and the supporting cast are at the height of their powers. But the show, as ever, belongs to Christopher Benjamin and Trevor Baxter who bring the central characters to glorious life by imbuing them with charm, wit, charisma and an incredible sense of fun and energy. It’s bally marvellous I tell you, bally marvellous. All aboard! Tim Mass Movement