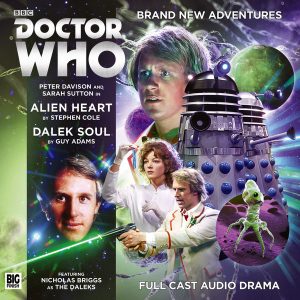 I suspect that I am, given that my earliest memories of television involved the US withdrawal from Vietnam and Genesis of the Daleks, predisposed to being interested and obsessed by both war stories and Science Fiction based around the machinations of maniacal robotic and cybernetic villains. So, knowing that about myself, it shouldn’t come as any surprise to me that the merest mention of a story in which the Doctor crosses paths with his mortal enemies causes me to almost meltdown with excitement and nearly pass out thanks to a combination of sheer, unadulterated joy and nervous apprehension.  Which is more or less what happened when that first, unmistakable, psychotic metallic shriek of Alien Heart / Dalek Soul burst forth from my headphones while I was out strolling with my hound, and almost certainly would have done had I not been jolted back to reality by the slightly scared and incredibly awkward stares of the elderly gentleman who, like me, had decided to exercise his dog at that ungodly o’clock in the morning.  If I’m honest though, I didn’t really care as I having far too good a time listening to Alien Heart / Dalek Soul to be concerned by what was going on in the world outside of the magical space in my head where Guy Adam’s and Stephen Cole’s tales came to life.

Comprised of two very different, but inextricably linked adventures in which the Doctor and Nyssa -when attempting to unravel the mystery of why  certain planets have disappeared – become hopelessly entangled in a Dalek plan involving genetic mutation and time disruption that’s designed to help them to only conquer the Universe but also win a war that has long since finished before becoming the seemingly witting pawns, and willing tools, of the Doctor’s foremost foes in an attempt to decisively crush the rebellion on a Dalek controlled world. Both stories, while being vastly different in style and structure, are gorgeously detailed, cleverly crafted and are positively dripping in rich characterisation, creativity and plot twists. Especially Guy Adam’s Dalek Soul which leads you down one enticingly dramatic path, before blowing a raspberry at its audience and running off in a completely, well-I-didn’t-see-that-coming different direction that’ll, like a first rate batsman answering the Doctor’s best googly, knock you for six.  The cast are, as always, wonderful, but the cloth is pulled from underneath all and sundry and the show stolen by Sarah Sutton, who as Nyssa takes centre stage and runs away with the whole production. Honestly, if there was such a thing as multiple curtain calls in audio productions for her performance in Alien Heart / Dalek Soul Sarah Sutton would be receiving them long after the last notes of the closing theme had faded. Tremble before the might of the Daleks… Tim Cundle