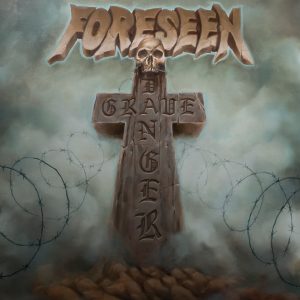 I feel like I’ve just been grabbed by the neck of my D.B.C. shirt and forcibly dragged backward through the chronal vortex without the aid of a time machine. And what was it that pulled me through history? It was Foreseen and their barely controlled, verging on the brink of total collapse whirlwind Crossover attack that despite its initial raging and foaming at the mouth appearance has an underlying thrash-fuelled precision that could tear apart the walls of reality should it wish to do so. And while I was exposed to it, that’s exactly what it did, catapulting me straight back to 1987 with its furious amalgamation of the Dead Brain Cells, Clown Alley and Septic Death and only the Universe reaching in and yanking me back, because as we all know nature abhors a vacuum, when Grave Danger had finished, saved me having to live through the nineties again.  Grave Danger is incredible, a screaming, thrashing ode to everything that Crossover was, should and could be again. Foreseen are here, it’s time to crossover and thrash out… Tim Cundle