Warning: preg_match() expects parameter 2 to be string, object given in /var/www/vip4/sites/vip6102689/httpd/htdocs/wp-includes/formatting.php on line 4866
 Diction - The Poor & The Hopeless - Mass Movement
x
Spread the love 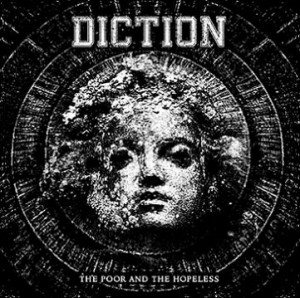 I don’t know if these dudes broke up in between releases, seeing as this is their first album since their 2006 release “From The Depths”. Either way, this album picks up from where they left off, and they continue to represent their LBU Rucktion sound to the max on here. There is more of a metal influence than there might have been, making this a prime slice of metal meets hardcore. Guitar solos and atmospheric tempo changes are paired with tough pounding rhythms and a hard vocal delivery. It strongly reminds me of some 90’s hardcore bands you would hear on Goodlife, think perhaps Shockwave or the H8000 metalcore bands, but the vocal delivery and the beatdown parts bring this crashing straight back down to the London sound that Rucktion likes to deliver. A small minus point is the slightly messy production, in particular the drum sound, but nevertheless this a must for fans of the metal/ beatdown sound. Tom Chapman