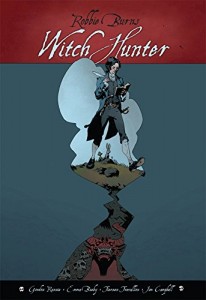 Even if you’ve never read or heard any of Robbie Burn’s poetry; given that he’s one of the few (and just about the only non-saint) people to have a night – the 25th of January – devoted to him; when his life is celebrated and remembered by people hosting “Burns Suppers”, there’s a good chance that you’ll have heard of him. One of the most lionized figures in literature, Burns burned brightly for far too short a time, his brief candle being extinguished before he reached his thirty eighth birthday. But Robbie Burns, the fiercely intelligent man who used words as his weapons and the tools of his trade, also loved the supernatural, tales of witches, pixies, ghosts, ghouls and all manner of foul creatures, and it’s his love of the other worldly that Gordon Rennie and Emma Beeby seize on in their tale of the poet’s imagined past.

Set at the beginning of his fledgling career as a writer, ‘Robbie Burns: Witch Hunter’ sees our unlucky hero taking the wrong path home after a night of carousing and womanising ends on a bitter note. Stumbling across a coven in full celebration, Robbie lingers a little too long and is rescued almost in the nick of time by a pair of Witch Hunters. I say almost, because before he’s pulled from the clutches of the servants of Satan, he’s marked by the witches, which greatly shortens his time on Earth from a whole lifetime to three days. But three days can be a lifetime, and in those three days, young Master Burns learns how to kill the minions of Hell. And rather than become another mark in Lucifer’s ledger, he resolves, with a little help from his new Witch extinguishing friends to free himself and slay those who would take his soul, eat his flesh and wear his skin. It’s a tale of monsters, demons, murder, unrequited love, poetic inspiration, murder, loss, the folly of youth, murder, the disintegration of the veil between the physical world and that place where vile entities dwell, cat bombs, what the poor box in church was really used for and more murder that cast doubt on everything you thought you knew about Robbie Burns.  Gordon Rennie and Emma Beeby’s tale is a wonderfully strange, blackly funny, nightmare excursion into the dark annals of Scottish history, in which the line between fantasy and reality blurs, fades reasserts itself and blurs again, whose plot is matched only by the deliciously detailed stygian artwork of Tiernen Trevallion.  Frighteningly good… Tim Mass Movement