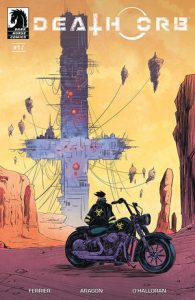 Set in a miscellaneous, post-apocalyptic wasteland of Mad Max proportions, Death Orb follows Rider, a lone rogue, desperately searching for his wife and child amidst a hoard of mutants, convicts, and poor man’s riot police, who are all loyally pledged to the powerful Father.

After booting off in every bar in a thousand mile radius, Rider comes across a crusty old thug with claws for hands and a distinct lack of eyeballs who, after demanding Rider stare into the black holes in his head, ironically, helps him to see what he might need to rescue his family. To save on the struggle, Rider does a Perseus, cutting off his head and sticking it on the back of his motorbike for later use. I mean Perseus didn’t have a chopper, but you get the idea.

Meanwhile in his Centrum Omnium temple, cutting a Dr. Doom-esque figure, we’re treated to Father’s totalitarian view of the future, which as far as he’s concerned, like every good tyrant, is perfection.

As our hero gets closer to the city, danger flies at him in the form of more gnarly henchmen, old mate’s crusty head isn’t giving up any clues, and the first issue ends with a nice little cliff-hanger.

This is extra moody, dusty old Star Wars meetsEasy Rider, and Alejandro Aragon’s (28 Days Later, Robocop) art is a fantastic reflection of this world;  a junkyard wasteland with touches of the intergalactic that features a multitude of hard edges that speak volumes about the characters. Ryan Ferrier (D4VE, Kennel Block Blues) comes in hard with the smart mouth one liners, nasty fighting talk, and humorous dialogue, especially considering it’s our guy talking to a severed head in a sack. And if all that doesn’t make you want to dig in, I don’t know what will. Sophie Francois