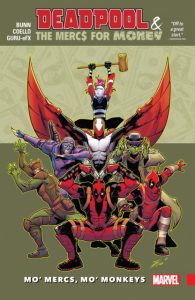 You just can’t keep a good Merc down, especially when he’s teamed up with a bunch of equally dysfunctional, highly motivated killers and thugs.  Their motivational drive becoming higher and higher the more they get paid for doing the jobs that no-one else is either willing to undertake or wants to do. But in Mo’ Mercs, Mo’ Monkeys, Wade and his boys have reached a moral crossroads, as the former leads them on a series of missions to kidnap and deliver radiation powered heroes to the shadowy organisation who hired them.  While his comrades in arms reach a consensus about the objectionable goals of their latest undertaking, Deadpool is seemingly oblivious to their concerns and even though he knows that the Mercs are about to split on him and does his best to keep the band together, it isn’t long before their “creative differences” force them apart for good. And plagued by visions of what’s he done for money, in Mo’ Mercs, Mo’ Monkeys, Deadpool sets out to rebalance the scales and with a little help from a bunch of unexpected new (and a couple of old) friends, corrects his mistakes in an orgiastic miasma of unmitigated violence, destruction and bloodshed in which the bad guys get theirs and the good guys emerge triumphant. Well, as much as they ever do in Wade’s world.

The creators of Mo’ Mercs, Mo’ Monkeys, Cullen Bunn and Iban Coello, are like one of those Japanese Super-Robots. You know the ones I mean, they’re mightily powerful and incredible in their own right, but when they combine, they become something colossal and unstoppable, and that’s exactly what’s happened to Bunn and Coello when they joined forces. They became a tightly focussed, furious creative force that hits every target that falls into their sights via their fusion of precise, stunning artwork and stygian humour, on point characterisation, punchy, wisecracking dialogue and hard hitting, compelling story telling. The utilisation of the gradually developing relationship between Wade and Negasonic Teenage Warhead as a device to spark the central characters conscience, allowing his humanity to counteract and conquer his often less than ethical mindset works in perfect conjunction with the sense of betrayal and loss he feels after being deserted by his former “employees” and helps set him on the path to redemption. For the time being at least, because we all know that it’s only going to be a matter of time until Wade returns to the “dark side”. Like I said earlier, you just can’t keep a good Merc down and Wade is the best there is at what he does. Killing’s his business and business is good… Tim Cundle