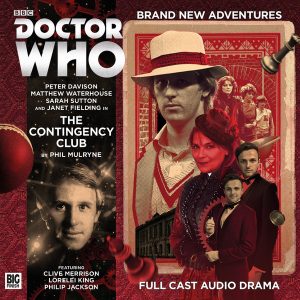 One of the most wonderful, and I’d imagine also slightly terrifying, things about travelling through time and space with the Doctor is that neither he, nor his companions, know where they’re going to end up next. This time however, the Tardis -in a display of stiff upper lippedness that would make Kitchener proud- transports its motley crew back to Blighty. Hurled back to the Victorian age by (in the beginning at least) forces unknown, the Doctor, Tegan, Adric and Nyssa find themselves in an era where chaps were chaps and the gentleman’s club was the last refuge of sanity in an increasingly “progressive” society. Except the club that they land in, The Contingency Club, doesn’t exactly conform to the tried and trusted rules of club-land. And before they can exclaim “By Gad!”, the Doctor and his erstwhile chums are up to their elbows in a mystery involving the subjugation of society’s brightest and best, the would be conquest of England, a strange extra-terrestrial plot conceived by the most bizarre of motives, unusual servants and all manner of devious motivations and machinations.  It’s all a rather rum to do that’s destined to end in disaster unless the Doctor can save the day, and the Empire, from the clutches of those who would see it all go up in flames.

The Contingency Club is a deliciously different take on the thoroughly well-established and integral part of the Whoniverse’s tropes and stereotypes, the base under siege scenario. Lighting its pipe and rolling its sleeves up, it gets stuck straight into its most agreeable and comprehensively entertaining story of double-cross, intrigue and duplicitous alien schemes while making light-hearted fun of some of the most ridiculous aspects of Victorian culture.  The writing, performances, characterisation and dialogue are as sharp as a rapier blade and the swift and expeditious nature of the plot is slightly reminiscent of rip-roaring yarns like The Assassination Bureau and the taught thrillers that John Buchan made his name authoring, but at the same time it never loses its underlying sense of fun and wonder.  By Jove, it’s a corking adventure…  Tim Cundle