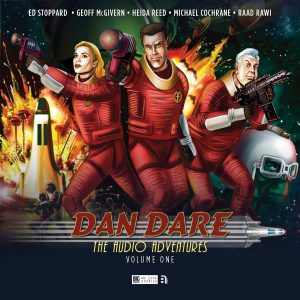 In the latter half of the twentieth century when super-heroes grew to dominate the pages of the four colour world, few homespun heroes managed to capture the public imagination in the same way that Frank Hampson’s Dan Dare did. The figurehead of the widely popular Eagle Comic, he was a bold, dashing, square jawed pilot of the future who saved the Earth, and other planets, from all sorts of alien incursions and threats, which usually involved the Mekon and his loyalist Venusian Treen army. Despite the fact that Dan’s fans usually knew that the bulb headed green horror was responsible for whatever ills had befallen our hero that week, invariably the stories were, and still are, exciting, edge of your seat stuff.  Having been first introduced to Hampson’s most famous creation via 2000AD, it wasn’t until the Eagle was relaunched in the early eighties that I actually became a fan of the character. However, I didn’t read the original Dan Dare stories that appeared in  the first generation Eagle until Titan reprinted them in the early years of the millennium, and while they were, by then, somewhat dated, they were still powerful tales of the unexpected dangers of space exploration and the mysteries and terror that filled the Solar System.  Now, much as he did when he appeared in 2000AD and was briefly revived by Garth Ennis and Virgin Comics, Dan Dare has been relaunched once more and while the format might be slightly different, for the most part Dan Dare remains the same.

Dan Dare:  Volume One goes all the way back to the plucky pilot’s first adventures, Voyage to Venus, The Red Moon Mystery and Marooned on Mercury and detail his initial encounters with the Mekon and other extra-terrestrial threats.  While the main plot arcs remain similar, the stories and characters are updated and given a twenty first century make-over which works incredibly well when combined with the pulp flavoured, golden age of science fiction drama that lies at the heart of Dan Dare’s continuing appeal. Whether meeting and defeating the Mekon, discovering what really happened to the Martian civilisation, battling ancient galactic insects or freeing the citizens of Mercury from the oppressive yolk of his nemesis, Dan Dare Volume One manages in its three reimagined and modernised stories to capture the essence of Dare’s world, his friends, his foes and everything in between. Portrayed as something of a loose cannon and an outsider from the word go, he immediately becomes a figure that the audience can identify with as he’s pitted against both cosmic villainy and the machinations and scheming of the corporations and bureaucracy who control Earth bound affairs. Littered with references to his previous incarnations as a staple of comic book history, the writer’s affection for the character and his mythology is obvious as they imbue each tale with the kind of gung-ho daring and danger that made Dare famous in the first place, while adding some of the controlling and mainpulative political and corporate ideologies that are favoured by, and flavour, modern space opera. This transforms Hampsons very simplistic and straight forward view of the world and authority into a far more complex and richly detailed stage for both the players and their characters. And speaking of the cast, Ed Stoppard’s Dan Dare and Geoff McGivern’s Digby and their fractious relationship that evolves from one of cold distrust to mutual appreciation would have stolen the show if it wasn’t for Raad Rawi’s planet chewing turn as the narcissistic and megalomaniacal Mekon. Because, and much as we’re loathe to admit it, everyone loves a villain and Rawi’s Mekon is the epitome of self-serving, cold, logical evil. Welcome back Colonel Dare… Tim Cundle

Audiobooks
One comment to “Dan Dare: The Audio Adventures: Volume One”