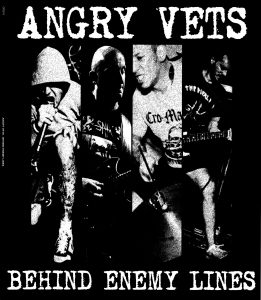 I’ve been looking forward to this album for some time now and it certainly does not disappoint. Angry Vets is a new(ish) band of veterans from the Paris Punk/ Oi!/ Hardcore scene, putting the original youth crew sound back on the map. Musically served up straight from the history books, all that is missing is a Don Fury production that would make this record sound right at home alongside early records from bands such as of Youth of Today or Judge. Just like those bands, Angry Vets don’t have a polished sound, but they carry with them the spit, sawdust and grime that comes with city life. They deliver the goods hard and fast with a tough, metal-free sound and barked vocals that have the same urgency in delivery that the New York pioneers of the style laid the blueprints for. I can hear touches of Hard X Times in the sound and it’s no surprise considering the Angry Vets contain two members of HXT, but at no point does this album steer towards Streetpunk or Oi!, it remains an old school youth crew Hardcore record from start to finish. A cover of YOT’s Slow Down is the icing on the cake of this fine slab of Hardcore, Paris style. Tom Chapman