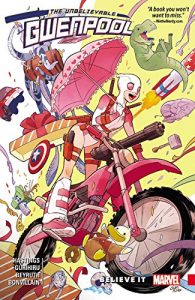 Strange things are afoot in the Marvel Universe, and right at front, in prime position leading the weird charge is Gwen Poole. Catapulted into the world of caped crusaders and costumed criminals from a reality in which they were merely the stuff of fiction, and topped her go –to reading listing, our heroine finds herself balancing on the nexus of a particularly odd crossroads. Does she deny what was once fantasy and is now her reality and try to find a way home, or does she wholeheartedly embrace it, warts and all? Deciding that lemonade is better than lemons and that Ferris Bueller was right when he extolled the virtues of the velocity of life, Gwen puts her own unique super-power into action and enters the fray as the pants-less, ghost-faced  anti-hero, Gwenpool and she doesn’t so much make waves as cause a tsunami that soaks anyone and everyone within splashing distance of her. See, she’s got the one thing that no-one else does, she’s got knowledge. She knows things. In fact, she knows everything. About everyone. Armed with this knowledge she embarks on her new career as mercenary come hero for hire who doesn’t have the first clue what she’s doing, but understands the rules, flaws and logic of the four colour world far better than its natives ever will.

And so she sets sail on a new adventure that sees her teaming up with Howard the Duck to take on Hydra and the Black Cat, spending her first karaoke and killing filled Christmas as a “hero”, gain and lose a side-kick and, thanks to circumstance, the cruel and capricious hand of fate and her “Hey ho, let’s go” all in approach to her new job (and complete lack of experience, powers and training) becomes M.O.D.O.K’s right hand woman, which opens up a whole new avenue of employment prospects for her. Oh, and did I mention that she also goes head to head with Thor and spends a heart breaking afternoon in the company of Stephen Strange? I didn’t? Well, she does and she also gets up to a whole lot more than that as well, but you know, spoilers. So hush, mum’s the word, walls have ears and if you want to find out more, you’ll just have to read the book for yourself. Which you should. Because it’s great.

Believe It, as you’ve probably guessed given the name if it’s central character, shares the same sense of anarchic, fourth wall shattering fun and humour as Deadpool. It’s a full-steam ahead, buckle up buttercup, pin you back in your chair tale in which the plot hurtles along in rapid fashion thanks to its left field approach to story-telling. However it isn’t all milk and cookies and wine and roses, as behind all the laughs and people dying in hails of bullets, explosions and increasingly bizarre ways, there’s also a palpable emotional depth to Chris Hasting’s story that emerges when Gwen lets her guard down and doesn’t try to disguise her inner trauma with a constant flurry of zingers and one-liners. Managing to combine wit and woe is no easy task, but Hastings rises to the challenge admirably and with Danilo Beyruth’s pulp influenced pencils and the Manga infused illustrations of Gurihiru has made sure that Gwenpool’s debut goes off with bang. A very, very loud bang… Tim Cundle