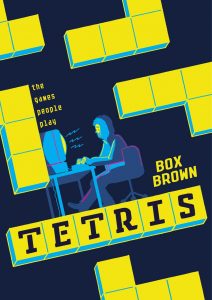 In a nutshell, this is the history of Tetris in, graphic novel form. That’s right, that annoying game millions of people became hooked on when it exploded on the scene in the 80’s, and even more so in the 90’s when it was released with Nintendo’s Gameboy. However, the frst question I asked myself when I picked up this book “How can anybody justify writing a book about a game where you need to drop colored blocks in the correct row as they fall?” Well, you’d be surprised as the history of Tetris includes the role it played in the Cold War, the billions of dollars that were won and lost during its journey to the handheld console as well as several murders and suicides that were attributed to its development and release. As it turns out the hidden history of the gaming industry, and one of its most famous titles, is a lot darker and far more interesting than you could ever imagine.

Designed by Alexey Pajitnov, a computer programmer in the Soviet Union in 1984, Tetris went on to make billions of dollars all over the world and it became the subject of a fierce battle between the USA, Japan and Russia, who all wanted a slice of it. Even our own Robert Maxwell tried getting his grubby hands on it, while Pajitnov, for the majority of his life, stayed quietly in the background and received nothing for his efforts.  The book starts with a brief history of humanities relationship with games (of various types) in ancient Egypt and Japan, then leaps forward to the invention of the micro-processor, which is where we meet Alexey, who just wanted to create a simple game for him and his friends to play in the office.

The format of this book is pretty simplistic in its approach. Clear concise artwork in panel form consisting of a simple palette of just 3 colors – black, white and yellow. It’s this approach that makes it such an engaging read and the occasional dose of humor splashed throughout, breaks up the history lesson quite nicely, without losing track.  I consider myself to be a gaming fan and to be honest the thought of reading the history of Tetris didn’t initially appeal to me, but once you start reading this book, it’s very hard to put it down….… Chris Andrews