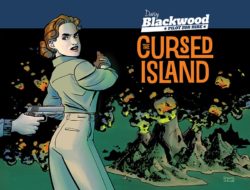 As I was raised on the pulp adventures of two fisted (and pistoled) vigilantes like The Spider, The Shadow and The Phantom, scientific supermen and space adventurers such as Doc Savage and Flash Gordon, Daisy Blackwood is a heroine after my own heart. Dragging pulp adventure firmly into the twenty first century, Ryan Howe’s no-nonsense, high flying creation is a  combination of Amelia Earhart, Indiana Jones and Cliff Secord, who in The Cursed Island becomes mired in the race to destroy an other-worldly artefact whose malign influence threatens to damn all of mankind.

Howe’ story, much like those of its pulp ancestry, is lightning quick, utterly absorbing and develops the personalities and quirks of its characters in conjunction with the rapidly evolving and unfolding plot. Melding Lovecraftian horror and themes with pulse pounding adventure, The Cursed Island is a rip roaring, good old fashioned yarn that completely subverts the male hero model that the traditional pulp model thrived on and delivers a character who is instantly likeable and a world that’s incredibly familiar.

Stylistically, The Cursed Island is a dead ringer for the old news-paper comic strips it pays homage to and Howe’s monochrome art manages to incorporate his influences, namely Herge, Carlos Ezquerra and Wilson McCoy, while retaining an individual, vibrant energy that flows from every panel. As far as I’m aware, The Curse Island is Daisy Blackwood’s debut long-form adventure (the character having previously appeared in Meanwhile) and while it reminds me of the unfortunately all too short-lived Tales of the Golden Monkey, it’s still one of the most original and inspired books that I’ve stumbled across in a long time that ended far too quickly and left me yearning for more.  Here’s to a long and successful future for Daisy. Ryan Howe, I salute you. Bravo sir, bravo… Tim Cundle