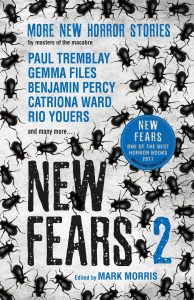 For most people, it begins with Stoker and Shelley. They dip their toes into Horror fiction accompanied by Jonathan Harker and Victor Von Frankenstein, travelling the well-documented paths laid down by two of the foremost legendary titans of the genre. My journey however, began elsewhere. At a young and impressionable age I discovered, hidden on my parents bookshelves, the Pan Book(s) of Horror Stories, and drawn in by their lurid cover art, I soon found myself immersed in a world filled with unspeakable dread and all manner of things horrific. Herbet Van Thal’s series of anthologies was a revelation and served as my introduction to the genre which nearly forty years later, I’m a still a dedicated follower of. And it also certainly explains my abiding love of short stories, as I’ve always associated them with Horror. For me, the two are inextricably linked, so when any volume of collected Horror stories crosses my path, I always pay a little more attention to them than is probably healthy, or good for me. While most serve their purpose and are a more than palatable way to pass an enjoyable afternoon or two, there are some exceptional aberrations that serve to remind me why these anthologies meant, and continue to mean, so much to me. New Fears was one such collection and now, as Samhain draws ever nearer, the second volume of Mark Morris’ compendium of tales by authors of the macabre has finally arrived.

Morris has an eye for exquisite writers and a finely tuned sense for what does and doesn’t work and has again compiled a series of disturbing and shocking stories that will linger long in the imagination and keep you awake at night while you ponder and question their many intricacies and deliciously dark details. As with all such anthologies though, there are stand-out moments, tales which clamber over the heads of the rest to stare out at the world from the top of the terrifying heap. Tales such as Tim Lebbons’ Emergence in which a seemingly innocent exploration of a tunnel serves as a herald for the apocalypse, Rio Youers The Typewriter that embraces the idea that evil never dies in a manner which will make you think twice about visiting thrift and antique stories and Bracken MacLeods’ exploration of the everyday urban terrors that lurk just beneath the seemingly ordinary, if a little strange, lives of small towns and their inhabitants, Pigs Don’t Squeal in Tigertown;  all of which are more than worth the price of admission in their own right. But all of them, the tales that stand tall and all of the other wonderful stories included in New Fears 2, gaze in awe at Haak by John Langan, a reinvention of J. M. Barrie’s most famous son and the historical events following the Spanish Armada’s attempted invasion of England as told by one of America’s foremost authors and recounted by a University Professor. It is, quite simply, a stunning work of imaginative fiction that combines horror and alternate history with a sense of wonder that makes the reader consider the possibility that there really may be more to this world than we ever dared dream possible. And it is more than enough reason to ensure that New Fears 2 finds a rightful place on your bookshelves. Hail horrors, hail… Tim Cundle