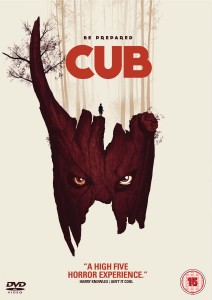 Cub (Altitude)
If you’re fed up of waiting for Hollywood to churn out something original in the horror genre, you could do a lot worse than check out this fearless Belgian film. The debut feature of Jonas Govaerts who has apparently cut his teeth on Flemish TV and various shorts, it’s the story of a Cub Scout troupe who set off into the forest on their summer camp, and are terrified by the campfire stories told them by the troupe leaders about a feral boy in the forest. Where does reality end and backwater myth begin? Then one of the cubs finds what appears to be a den in the woods, and things start to go missing from their camp… and sure enough it’s not long before all hell breaks loose – but there’s nastier things afoot in this forest than meets the eye, and several characters reveal themselves to be more – or less – than you first think. Taking its lead from slasher classics like ‘Friday The 13th‘ but gleefully throwing in hints of everything from ‘The Silence Of The Lambs’ to ‘Lord Of The Flies’, this is both a cautionary tale and a brutal hack-em-up. With some fantastically natural turns from its stars, and some great effects to hammer home the unflinching violence, not to mention some creepy symbolism, tense, claustrophobic set pieces, and a grim downbeat ending, ‘Cub’ is something of a revelation: an intelligent original horror film that is far more than the sum of its influences. Ian Glasper