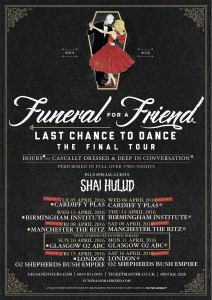 Tickets Funeral For A Friend’s last ever tour are selling like hotcakes with nearly every date totally sold out and now they’ve added the legendary Shai Hulud as main support. As vocalist Matthew Davies-Kreye explains, “We’ve always been proud of showing off our musical roots and when we get the chance to bring one of the bands that influenced us on musical and artistic levels it gets really exciting. It’s why we are so thrilled to be playing with Shai Hulud on our final tour. Their inspiration is prevalent throughout our musical history and they’ve laid the groundwork for a lot of the “metal-core” you hear today. Their influence is immeasurable. All those coming to our final shows are in for a treat!”

The series of dates will see Funeral For A Friend play iconic albums ‘Hours’ and ‘Casually Dressed And Deep In Conversation’ on consecutive nights in each city. Matthew explained the band’s thinking behind the decision to make this the band’s final tour –

“It’s the natural end. We’ve done everything we set out to do and way more than I could ever have hoped so I’m not upset that it’s run its course. We all felt that ‘Chapter And Verse’ was a pretty decent full stop on an incredible fourteen and half years of making music together.

So, how do you celebrate a huge part of your life? You play some shows! For me it seemed obvious to go out with both ‘Hours’ and ‘Casually Dressed..’ I feel that both those records distill what Funeral is to a whole load of people more definitively than just piecing together a set from all the records we’ve made. It seems to me that those are the records that matter most and ‘Hours’ to me is my proudest achievement in music with Funeral. I don’t know why but it fills me with an overwhelming sense of pride.”