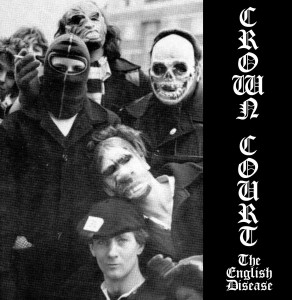 Crown Court – The English Disease 7″ (Rebellion)
Carry on oi! Taking us back in time, Crown Court reintroduce the smog, sweat and grime of 1970s and 1980s London. Dirty black buildings on the verge of collapse, dingy drinking holes and shifty characters paint the picture and Crown Court provide the soundtrack. Think back to bands such as Menace or Criminal Class, clean sounding guitars, a solid pounding beat and vocals spat out with venom. All three songs on this single combine guitar melodies with tough shouted vocals, it’s a direct approach with few surprises, but they have got the sound nailed. It’s actually not too far from what many hardcore bands are playing these days, think of the mid-paced Violent Reaction songs and this sound is actually pretty similar. Rebellion records like to keep the spirit of vinyl going strong as well as satisfying record collectors, so be quick to grab one of this initial press of 700 records. Tom Chapman