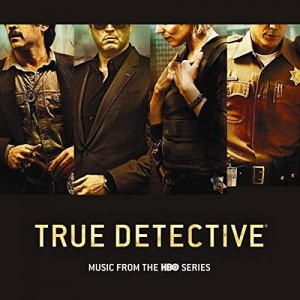 Various Artists – True Detective (Music from the HBO Series) (Harvest)
Music, or more accurately good music, should have an instant emotional connection with the listener; creating immediate and heartfelt imagery in the mind’s eye that allows the listener to focus entirely on, and submerge themselves within it. This is exactly what the ‘True Detective’ soundtrack does. Whether it’s the strangely emotive post-disco of Leonard Cohen’s ‘Nevermind’, Bonnie Prince Billy’s haunting ‘Intentional Injury’, the downbeat, homespun Americana catchiness of The Handsome Family’s ‘Far From Any Road’ or John Paul White’s aching, soulful country-fried ballad ‘What a Way to Go’, every beat and every note paints a picture of the gritty, dark underbelly of life in which ‘True Detective’s characters function and live. But the real star of the “show” is Lera Lynn, as each of her songs flirt hopelessly with loneliness and sorrow, but at the same time possess a strength and rare beauty, both of which are reflected not only in her astonishing tunes, but also in her incredible voice. It’s raw, dirty, and full of noir-fuelled angst, sorrow and depression and it’s absolutely wonderful…. Tim Mass Movement