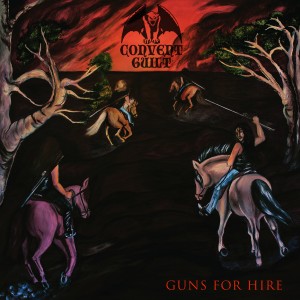 Convent Guilt – Guns For Hire LP (Cruz Del Sur Music)
A new name to the trad-metal scene at this point, its Sydney, Australia’s really old school offerings Convent Guilt, and they deliver an ancient vibe. Rattlin’ out atmospherics from a dark NWOBHM era and muddy as you like, do not expect anything fancy here. Tasty, solid, and basic – but by no means technical. This debut album insights visions of (very) early Maiden and a set up which was breaking through way before technology stuck its neck in. With an album title that may suggest AC/DC connotations you couldn’t be father a field, not an easy task for any band coming from down-under. Some serious axe work in places but nothing really up tempo, however what Convent Guilt do offer is a sure fire trip back in time. Dirt, sweat, and no nonsense,.. straight-outta the pub heavy metal. Mark Freebase