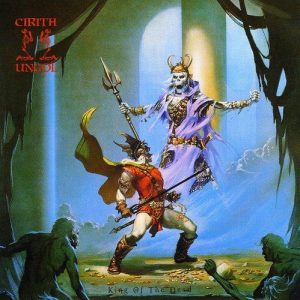 Coinciding with Cirith Ungol’s first ever appearance on European soil (quite an achievement by the promoters considering the band have been going since the early 1970s!), Metal Blade has put together this deluxe reissue of their second album dating from 1984. Cirith Ungol is one of those bands that in my mind represent all that is glorious about traditional heavy metal. Fantasy artwork, ridiculous lyrics and top-notch musicianship create the basis of this album. Although they were picked up by labels such as Enigma and Metal Blade, they never achieved a significant level of success but their name commands a lot of respect. I think the vocals were a key factor in their inability to hit the mainstream, as singer Tim Baker’s singing style is bizarre to say the least. It is something of a combination of speaking, shrieking and banshee wails, without any melody whatsoever. Definitely an acquired taste, but it makes their sound absolutely unique. But many metal vocalists were never about sounding like everyone else, and so for me this sits somewhere alongside the likes of Mercyful Fate or Confessor. The music has the power and style that bands such as Savatage or Crimson Glory would borrow a few years later and bring the power metal sound to a wider audience, but Cirith Ungol were there before, with a sound that defies definition and trend, so if any of that sounds remotely appealing, I would give this a try. Tom Chapman