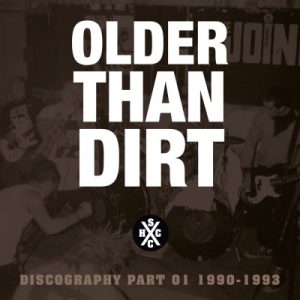 I remember this band well. I recall their “raging south coast hardcore” sound, seeing them on a million and one fliers, and I picked up their flexi disc from Armed With Anger distro and it was pretty much as thick as a normal record. Ahh good memories from a long time ago, brought bang up to date with the release of this discography. To be honest I had forgotten they had recorded so much material, I just really remember the flexi and I had the demo lurking on cassette somewhere too. To my surprise when I stuck the disc in the player some of the songs such as We Still Care and Racist Bullshit are still lodged in my memory so they were definitely doing something right. The early days of O.T.D. were a weird period in the UK scene – the likes of Heresy, Ripcord etc had faded away and the next wave of bands was still a couple of years away, so they were a little bit out on a limb. Fortunately they had the Joiner’s Arms in Southampton as their “local” and so they were able to pick up gigs with the likes of anyone from Extreme Noise Terror to Slapshot to Green Day and made a name for themselves. You can kind of hear that mish-mash of styles in their sound too, boiled up and distilled into their own patented raging south coast Hardcore brew. Tom Chapman