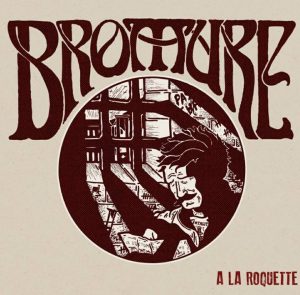 Despite the amazing bands that have emerged from the ashes of Maraboots (Rixe, Lions Law and more), they found a place in the heart of many a skinhead, punk rocker and other misfit. They were instrumental in reviving the classic French oi! sound but instead of just copying the likes of Camera Silens, R.A.S., Komintern Sect and so on, they developed their own immediately recognisable sound and with the release of their final EP “Ils Ont Tue La Oi!” they finished on an absolute high. So Bromure is definitely a band in their own right, but seeing as a few members of Maraboots are involved here it’s hard to avoid comparisons. Their approach is very similar – taking those basic elements of the uniquely French sound, with the addition of saxophone as a main instrument rather than just padding out the background. It’s a recipe that works very well for them and these three tracks are well crafted pieces of French punk rock, with a nod to the 80’s but a sound that is stil bouncing and relevant today. Fans of Maraboots or Syndrome 81 or the other fine bands France is producing nowadays should get their hands on this without hesitation. Tom Chapman