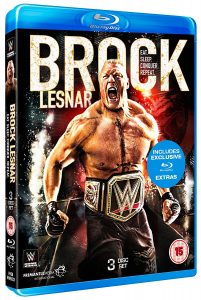 Brock Lesnar, we are led to believe, is a legitimate ass-kicker.  His gimmick, if you can call it that, is that he is entirely himself on TV: a former NCAA wrestling champion, former UFC champion and, yes, a former world heavyweight champion in both Japan (IWGP) and the US (WWE).  Brock Lesnar, since his 2012 return to sports entertainment, has been treated as a “special attraction”.  With his own bespoke timetable, Lesnar picks and chooses the matches he has and even the TV and house shows he participates him.  He is the ultimate part-timer: seldom on our screens unless he is about to be thrust once again into a main event.  And there is no doubt that he is exactly what his advocate, Paul Heyman, often describes him as: a “once-in-a-lifetime performer”, who brings in the big bucks at the box-office and never fails to draw interest in his bouts.

And Paul Heyman deserves to be mentioned here, because, let’s be honest, it is not Brock Lesnar who makes us interested in his matches, it is his advocate.  While Lesnar’s appearances are sporadic, Heyman is never far away from a microphone to talk us into an arena to see his Conqueror – the Night-Mayor of Suplex City – the one in twenty-three and one, the Beast Incarnate…“BROCK Lesnar” (and don’t pretend you don’t know exactly how that name was said – snarled with guttural authority, as only Heyman can.)

Taken by himself, Brock Lesnar – though quite the physical specimen – is actually pretty awful on the mic.  His promos since his 2012 return have been limited, and tend to focus on the fact that he basically hates trying to entertain fans, is a misanthrope who cares only about his own family, and doesn’t really rate the WWE product.

This is important, because the contempt Lesnar shows for wrestling fans on each occasion he has been allowed on the mic is on full display here on this poorly thrown together three-disc collection.  First off, there is no documentary.  The only interstitial video segments between matches are a mash-up of old Lesnar talking heads we’ve seen before, spanning from the very recent to when he was a rookie during his first run in the company.  None of the found footage provide any important revelations or insights on the matches contained, just more of Lesnar droning on about what a bad-ass he is and how hard he trains.

But at least there’s the matches, right?  Well…except the matches selected are quite arbitrary, with no real rhyme or reason for their inclusion.  So we leap from an early OVW tag team match to a non-televised dark match against mentor, Mr Perfect (the only real gem on the set), to suddenly a post-King of the Ring winning Lesnar battling RVD for the intercontinental championship.  Then we’re fighting Kurt Angle for the WWE Championship.  Not the classic Wrestlemania match where Lesnar nearly broke his neck doing an ill-advised shooting star press, but a later Summerslam rematch.  We get the inevitable Wrestlemania match against the Undertaker that saw Lesnar defeat the Streak, but we also get a 2003 Biker Chain match between the two from an old No Mercy PPV, and a third battle from the 2015 Hell in a Cell.  Likewise, we are treated to not one, but two matches against Triple H.  While all of these matches are fine, with the WWE Network now offering us every WWE Brock Lesnar pay-per-view match ever filmed, there really needs to be more reasons to buy a collection of matches than the matches themselves.  Past WWE releases have included legends like Bret Hart or Sting HAND-selecting the matches they wish to show us, explaining why the match is significant or important to them and making us care about seeing it one more time.  Or there has been a documentary which gives vital context beforehand as to why the selected matches were particularly important in the subject’s career.

Instead with this Lesnar collection, we get old clips of promos we’ve seen before strung together to say nothing new about an arbitrary collection of matches we can already get cheaper on the WWE Network.  While there are, of course some diamonds in the rough – most notably the stellar contest against CM Punk, which remains a 2013 match of the year candidate, and the phenomenal triple threat between Lesnar, John Cena and Seth Rollins from the 2015 Royal Rumble – by themselves they are just matches.  With no care gone into the curation of this collection, ultimately, like Lesnar himself, we are left with something designed to make as much money as possible with as little effort as possible, fans be damned.  If this is the best Suplex City has to offer, I’ll find my entertainment elsewhere. Dan McKee