Formed in the Summer of 2015 and rising from Stockport, Storm Harbour have been showcasing their talent across the whole of the North West for the past year. The band are making new friends and fans throughout the UK for their dynamic hybrid of Pop Punk which combines uninhibited energy with abundant monstrous hooks. The band’s debut self-titled EP is rammed with six slabs of engaging spirited melodic punk that is sure to drive the up-tempo five-some to the forefront of the Brit Rock scene. 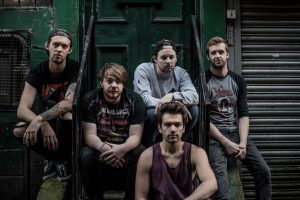 Storm Harbour are now fixed to make their mark with their explosive self-titled debut EP which soars from the get-go. The opener Backbone quickly sets the record to flight, calling to mind the infectious appeal of Fall Out Boy. Alchemy then changes the pace and illustrates the quintet’s nifty ability to dish up an engrossing slice of modern rock marinated with a killer hook. As the record kicks on, Sink Or Swim buoyantly glows with its gargantuan refrain, and the closer Calm Down continues to ignite by attacking aural senses with an onslaught of stabbing guitar riffs. Storm Harbour are geared up for shows throughout the Autumn and beyond, so stay glued to their social sites for updates