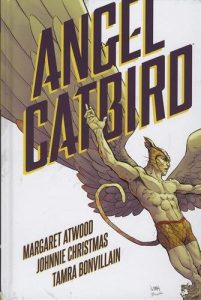 There was a certain majesty and mystery to the heroes of the pulp magazines and in the golden age of comics. Muscle bound do-gooders and miracle men whose only reward was seeing justice done and wrongs righted; and Margaret Atwood’s (yes, that’s right, no you’re not seeing things and it’s not a typo, THE Margaret Atwood has added writing graphic novels to her not inconsiderable skill set) Angel Catbird is an ode to that bygone age.  Mixing fantastic and eccentric heroes and creatures, dastardly villains, super-serums and an unexplored and an unimagined world that exists just beyond our reach in which the laws of nature have been forgotten and where half-cats, half-birds and half-rats thrive.  While it incorporates a number of super-hero stereotypes in its story of a band of disparate heroes uniting in order to thwart a mad scientist and his dreams of global domination, Angel Catbird tosses them around and plays with them in much the same way a cat does with a ball of wool, using them and then abandoning them when it sees fit.

As much of a love story as it is a tale of action and adventure, Angel Catbird thrives on good old fashioned story-telling, substantial characterisation (both human and animal) and an energetic and incredibly imaginative plot.  The retro sensibility that imbues the story is also mirrored in Johnnie Christmas’s gloriously detailed art that harks back to the late sixties and early seventies heyday of chiselled, square jawed heroes and malformed, ugly villains, creating a visual division between right and wrong that the reader instinctively, and automatically, relates to. Agile, witty and enchanting, Angel Catbird also takes it audience on a rollercoaster ride through an emotional minefield, as it hurtles through its themes of love, loss, acceptance and the need, above all things, for humanity to see the denizens of the animal kingdom as our equals in every sense. The first volume in an ongoing series, Angel Catbird concludes with a flourish that would have been at home among the finest series of the Saturday morning chapter plays and cliff-hangers and the wonder and excitement that fills every page of this opening salvo bodes well for the future. Pulptastically purrfect fun… Tim Cundle