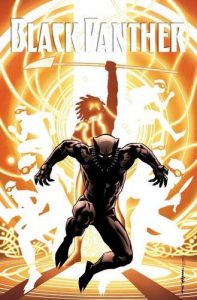 Heavy is the head that wears the crown, and when the Kingdom governed by said crown is in a state of political upheaval and besieged by armed insurrection, the weight of guiding it through such turbulent times would be more than most men could ever bear.  But T’Challa, the Black Panther, isn’t most men, and with a little “help” from his friends fights back against those who would take what he and his supporters view as being his by divine right. And if A Nation under Our Feet followed the traditional superhero model, the story would centre around Panther and his allies battling to regain his country and the belief of his people, but it isn’t. It’s so much more than that. While it does incorporate some of the “standard” and more usual comic book tropes , Ta-Nehisis Coates tale of a nation undergoing a cataclysmic shift in its belief system in which the old ways that have moulded and shaped its destiny are forced to confront the ever changing face of the modern world,  effortlessly combines politics and spirituality, in a very personal, and at times intimate, tale of a man trying to come to terms with who he is, his place in the world and how the way he both sees himself, and what matters most to him, differs from the way his people and country do.  As well as being an allegorical examination the growing global dissatisfaction with the establishment and conventional models of rule, A Nation Under Our Feet also explores familial relationships, friendships and how duty alters and changes their course and the often overwhelming effect past actions have on the present and future, all of which is beautifully brought to life by the sumptuous art that adorns each and every panel of The Crew.

Surrounded on all sides by those who would see him overthrown, T’Challa realises that there’s no smoke without fire and that someone, somewhere is aiding the revolutionary fight. And having ventured far outside the borders of his home, he realises that the kind of help being given always comes at a price, one that his country will ultimately have to unwillingly pay. Having recruited some old friends to his cause, begins to fight fire with fire and play his enemies at their own game.  Being a war in all but name, victory and sacrifice sit at the opposite ends of the scales of fate, and a small triumph for one side results in an unexpected sacrifice by the other, as T’Challa and Zenzi and The People (the forces that he faces) arrange their pieces on the chessboard that is Wakanda. Having started his campaign in earnest, T’Challa finally turns his attention to the personal matter that plagues him and sets his sights on freeing his sister from her otherworldly prison and returning her to the land of the living. Brimming with intrigue, fables, mythology and multiple, interwoven plots, The Crew is an intuitive, insightful and intelligent story that ploughs its own complex and compelling path through the four colour universe.  Superlatives seem oddly meaningless when the thing that they’re being employed to describe makes them seem utterly redundant and inconsequential. Which is exactly what A Nation under Our Feet does…  Tim Cundle