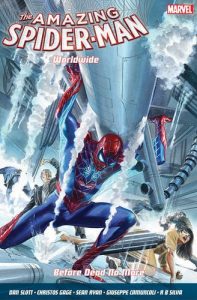 Just when things finally look like they’re beginning to go Spidey’s way, the old Parker luck pops its head above the parapet, throws a spanner in the works, flips him the bird and blows a big fat raspberry in his direction. Pete may have become the CEO of a major international company, but that that doesn’t mean that fate has is done messing with him and the lives of those of those closest to him. If anything, it’s increased its interest in making him pay for every little bit of success that the Universe has granted him, even though he’s earned it ten times over. After all, when last we left him celebrating with his family, Jay (Aunt May’s husband and J. Jonah’s father) collapsed, writhing in agony and as Before Dead No More opens, Jay is in hospital as it’s revealed he has a hereditary heart condition from which there is little hope of recovery via the tried and tested conventional methods.  Then, seemingly out of the blue, Jay is offered a “miracle” cure by New U Technologies, a company at the cutting edge of modern medical technology. Pete, and his alter-ego Spidey, have been around long enough to know that if something appears to be too good to be true, then it usually is, but despite his initial reservations, and in desperation following a disaster at one of his companies chemical plants, he turns to New U Technologies to save the life of one of his employees.  Which is when everything begins to go wrong for Pete, Spidey, Aunt May, Jonah and a whole host of other folks, but most of all for Jay.

Having ignored his trepidation and caution in favour of wanting to believe in a scientific breakthrough, in the aftermath of his employees incredible recovery, Pete’s Spider sense kicks in and reminds him that there’s no such thing as a free lunch.  Aware that there’s something horribly wrong with New U’s wonder cure, Spider-Man’s attempts to discover exactly what the problem is plunges him to a maelstrom of calamity, one in which long dead foes and faces from the past start to reappear, his closest confident is forced to betray him, Otto Octavius launches his strategem to regain control of his previous vessel and a strange new cabal of super-villains begin to enact their plans. Before Dead No More is a pulse pounding, rapid fire tale in which all of the protagonists gradually reveal their hands while preparing for the apocalyptic showdown that’s set to follow.  However, before the next chapter can begin, this one ends in gut wrenching sorrow as one of Pete’s nearest and dearest makes their final curtain call in Before Dead No More’s moving and emotive finale. Slott and Gage are, as ever, on top of their game having crafted a superbly written story in which Spider-Man’s fundamental decree, “With great power, comes great responsibility” takes centre stage in Camuncoli, Silva and Garron gorgeously detailed and exquisitely illustrated theatre.  The Clone Conspiracy starts here and for both Peter Parker and Spider-Man, nothing will ever be the same again…  Tim Cundle