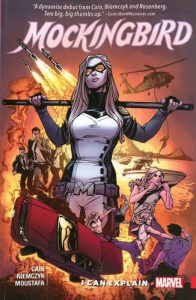 Barbara “Bobbi” Morse finally gets her first solo outing as Mockingbird….And what an outing it is. I Can Explain is a collection of the first five books from the new series, given the evidence in this collection, promises to be outstanding. Following on from the emergence of other strong female characters such as Jessica Jones, Black Widow, Scarlett Witch and more, New York Best Selling author Chelsea Cain has seized the opportunity to guide the destiny of the strongest female character yet and explore the superhero psyche from a new perspective.

In an effort to control their accidental superhero, Mockingbird, S.H.I.E.L.D requires her to attend a medical clinic every week for a “check-up”. You see, Morse has a virus. A virus that gives her strange abilities and powers, but also threatens her life which was saved when Nick Fury injected her with the super soldier serum. But now her abilities are getting stronger by the day.  And something is going on at the international peacekeeping organizations underground facility. Something that, much to her chagrin, apparently involves her. While trying to find out what’s going on, Bobbi runs into The Queen, The Naughty Hellfire Club and a whole host of who’s who in the Marvel Universe and she’s also on hand to help a teenage superhero cope with the raw emotions and hormones that are part and parcel of becoming an adult and the media intrusion that comes with being part of the “super” club.

I Can Explain reads easily, the subjects it deals with don’t feel labored or gratuitous and the story flows incredibly well. Cain also manages to inject a healthy amount of humor into the book, which serves to enhance both the plot and characterisation, without detracting from either.  And it looks, thanks to the artwork, fantastic too. Mockingbird has a scientific mind, but she can also kick some serious ass. Mockingbird is proof positive that you don’t need a Y-chromosome to be a super hero. You just need attitude… Chris Andrews