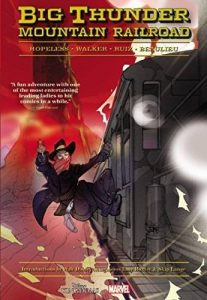 Chances are, that if you’ve been to a Disney Park, you’ve ridden the rails of Big Thunder Mountain in the out-of-control locomotive that veers, clatters, tilts and speeds around the track, as though its boiler is about to explode and  its being driven by a Hell bound demon. And like me, and so many others before and after me, I’ll bet you had the time of the life while you were holding on tight and whooping and hollering while the train kept rolling, full steam ahead. But, I’m guessing that out of all of the folks who’ve shared that experience, there aren’t many of us who’ve thought about the legend of Big Thunder or imagined being back in the Old West while hurtling around the mountain.  Turns out that there’s a whole load of folklore and tales surrounding Big Thunder, but the story of when and why the train first went wild, well, that’s best left to Dennis Hopeless and his artistic amigos Tigh Walker, Felix Ruiz, Guillermo Mogorron and Jean-Francois Beaulieu to tell, and it’s a mighty yarn that’ll keep you glued to the edge of your seat right up until the end.  Yes siree, it’s a humdinger of a historical adventure and a doozy of a drama, one you’ll want to savour every single moment of.

Big Thunder is the story of a young girl – Abigail – who’s thrust into the hardworking world of mining on the Western frontier when she goes to live with her father (who owns and runs Big Thunder mine), in the shadow of the mountain. Determined to keep her safe and away from the day to day business of gold mining, an enterprise that consumes his waking hours, he tries to keep Abigail’s rebellious spirit in check, failing miserably when she flees the confines of her well-to-do home in order to experience all that Big Thunder has to offer. It’s a decision that she soon begins to regret and one that nearly costs her life as she runs into, and joins a group of bandits and discovers out that life in and around the mountain is a lot more dangerous and complicated than she ever imagined. Packed to the rafters with treachery, double dealing and the kind of moustache twirling villainy that was part of the furniture in every legendary Western, Big Thunder Mountain Railroad  is a pulp heavy fable of the highest order in which the bad guys get theirs, the good guys come out on top and Big Thunder bests everyone. And the legend of how the crazy train went off the rails? Well, that’s the best bit of all, but if you want to find out how it happened, you’ll just have to dig deep and pick up Hopeless, Walker and Ruiz’s mighty fine book for yourself, because I ain’t telling. All aboard… Tim Cundle