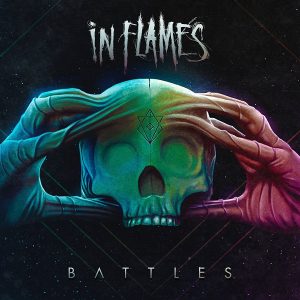 Listening to In Flames, for me, is like farting but I’ll come to that in a minute!

Battles is an apt title for the Swedish melodic death metallers twelfth album release. With each and every album they have been progressively moving more towards being a melodic death metal outfit rather than being a death metal band with some melody. I have found every consecutive album a bit of a “battle” to get into and I got to my absolute limit with the release of Sounds of Playground Fading.

Battles, the album is a backward step and that’s a good thing if that makes sense? It feels like it’s a bridge between the old and the new. Throughout the entire album Anders’ vocals are outstandingly voracious again clearly harking back to the good old days. The opening track Drained kicks off the album quite eerily but gets its head down almost instantly slamming straight into some old school verses that could have quite easily been ripped right off Re-route to Remain or Come Clarity.

The melody that is apparent on the opening track carries right on into the insanely melodic stand out second track The End and the nthird and fourth tracks carry on with a distinct A Sense of Purpose flavor.  The second half of the album has more of distinct darkness to it with tracks like Underneath My Skin and the harrowingly beautiful gem, Wallflower leading into the self-reflective finale Save Me

Battles feels like a complete album and not one of edgy experimentation like Sounds of a Playground Fading was  and has none of the the absolute pomposity of the awful Siren Charms. It’s all here, a reawakening of the old Anders that I love so dearly, a devil in slippers with vocals that could melt your face and soothe the pain away all the at the same time. A bass sound that feels like it’s manufactured by people who work at the Irn-Bru distillery and the spirits returned the bands guitar tones from whatever purgatory they’d been condemned to.  Thank you dear God, thank you!

So how, and why, do I liken In Flames to the old bottom burp? Well someone told me to approach this album based on how it makes me feel. This got me thinking, and I quickly realized that listening to each consecutive In Flames’ albums is akin to farting.  Back in the old days I’d pull a face while lifting a cheek and let it rip without fear of any consequence. But you know how it is, one day you get the “one”, the one that sneaks up on you and makes you feel all cozy and warm right? Well, the past few In Flames albums have been that kind of touching cloth type of fart and in all honesty I couldn’t trust in them anymore (see what I did there Jesterheads)?

Coming into this review was like that one fart, “you know it’s at the gates and it could go either way, so you hold on for a while” In the end you take a risk and realize you got away with it and so it puts a smile on your face.  Battles is that fart, it put a smile on my face but I’m still wary, I think the trust that’s been whittled away over the past few years hasn’t entirely returned. Yet.. However a few more albums like this and I’ll be letting rip again without the fear of shitting in my pants!…Ladies and Gentlemen I give you Battles, a magnificent maleficent menagerie of anthems that is a love letter to fans of In Flames, bth new and old alike… Alan Wright