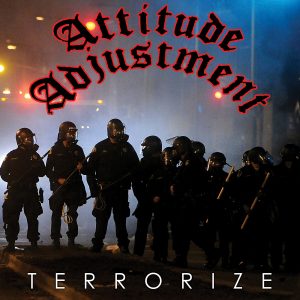 That’s right kids, Attitude Adjustment are back; and damn I wish ninety-nine percent of “new” bands sounded half as sharp, focused, tight and full of, well, attitude, as the AA guys do. Terrorize is a no compromise, hard as nails crossover masterclass born from the wreckage of a head on collision between Poison Idea, Fight Back era Discharge and Septic Death.  Rammed full of anger, nihilism and an unrelenting fury that fuels it from beginning to end, Terrorize is the kind of record that you always wished your favourite band would make. And now your new favourite band have gone and done exactly that and have not only proved that crossover is best left to us older folks, but that the kids really don’t know shit.  It’s thrashing time… Tim Cundle