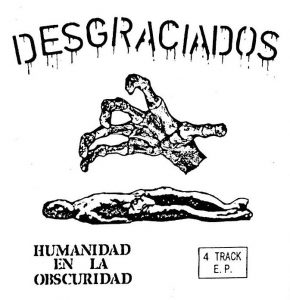 All I know about this band is that they are from Canada, sing in Spanish, and have their debut record out now on Deranged records. This shiny little disc contains four songs of traditional hardcore punk, delivered raw, hard and fast. Coming across like it was recorded in the 80’s in a basement somewhere in the UK, the sound reminds me of some of those Ripcord or Extreme Noise Terror early recordings – no frills whatsoever but everything resonates loud! Desgraciados take their musical hints from a long time ago, reminding me at times of Crucifix, Negazione, Mob 47 or any other noisy buggers that were thrashing their way around the world some 30 odd years ago. The latter half of the record especially grabs you by the throat, with the sub-one minute “Caos” giving way to the slow pounder that is Enemigos Callejeros. Without covering new ground, Desgraciados bang out a modern classic take on the old school hardcore style. Tom Chapman