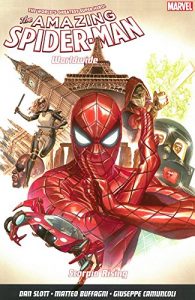 The world, or rather our individual and often blinkered and narrow interpretation of it, is based on a series of constants. The sun will rise and then set, tides will ebb and flow, the moon’s orbit never varies, global political balance is maintained through the establishment of the illusionary belief in “goodies” and “baddies” (designed to distract us from thinking about and thus rectifying the real problems that we’re facing), and Dan Slott’s continuing run on Amazing Spider-Man is quite possibly one of the greatest comics of all time.  Seriously, it’s a book that, thanks to Slott’s seemingly endless creativity and limitless imagination, has propelled Peter Parker and Spidey from the lowest of lows (which incidentally, has to include being “possessed” by the spirit of Otto Octavius even though Superior Spider-Man is, in this scribes humble opinion, one of the finest moments in the wall-crawlers long and eventful history) to his current position at the highest of the highs, as the head of his own multi-national corporation. He has, to borrow (and slightly amend) an overused and clichéd James Cagney quote, “Made it Aunt May” and is “on top of the world”. Slott has managed to catch lightning in a bottle during the time he’s spent writing Amazing Spider-Man and in Scorpio Rising there’s no sign of the magic withering or abating, as the book continues its unbroken legacy of thrills, chills, excitement and intrigue.

Scorpio Rising sees Pete facing off against his old adversary Mister Negative who has returned to Shanghai (where Pete is now based thanks to being a corporate giant and having his headquarters based there) to exact his revenge on the man who he blames for all of his ills. Having somehow managed to bend a couple of previously incorruptible heroes to do his bidding, Negative sets out to trample on anyone in his way and make Parker an unwitting pawn in his scheme, which, as these things always do, makes life ten times harder for Spidey. It’s a frantic game of cat and mouse and a classic web-slinging story that’s been transplanted to the other side of world, but as good as it is (and it is), it merely serves as the B-feature; an opening act for the finale of the Zodiac saga, a ridiculously paced adventure that involves skydiving from space, a race to prevent Scorpio (the villain of the hour) controlling the world through the use of extra-dimensional artefacts and everything in between. Seriously, the latter half of this book is an adrenaline packed, nerve shredding rollercoaster ride that makes the first half seem like a half-hearted stroll through the daisies. Which, given how insanely good the whole Mister Negative escapade is, is no mean feat and serves as further proof of Dan Slott’s innate understanding of the characters he’s writing for and his unnerving ability to craft increasingly magnificent plots for them, both of which are amplified by his snappy, spot on dialogue and the frankly gorgeous artwork of Buffagni and Camuncoli.  From cover to cover and beginning to end, Scorpio Rising is another triumphant chapter in the continuing adventures of Spider-Man and long may his tale continue. I hope it never ends… Tim Cundle