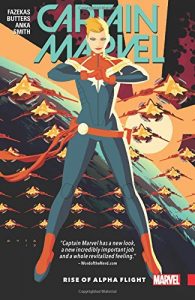 I’ve got a confession to make and while it might damage my street cred with the hip cats who are down with, and know everything about, all of the coolest things the minute they happen, I’ve got to unburden my soul and tell it like it is before I’m consumed with guilt. Before Rise of Alpha Flight, I hadn’t read any Captain Marvel books and only knew who Carol Danvers was through her affiliations with the various teams that protect the Marvel Universe from all sorts of extra-terrestrial and Earthly villainy and ne’er do wells. That’s right kids, I only had a passing familiarity (and not the sort that can get you locked up in some of the more God fearing places out there) with the Captain, but having rabidly devoured the Tara Butters and Michelle Frazeka helmed five issues contained in this book, I need to know more about her. Much more. Does that make me a fan? A “noob” with delusions of grandeur or something else entirely? I honestly don’t know. All I do know, is that having been smacked around by Kris Anka’s furiously gorgeous and intricate art and pummelled by Frazeka and Butters fantastically paced, rip roaring plot that teams Carol up with Canada’s premier super hero squad (that’d be Alpha Flight) in space, I have a strange compulsion to disocver all there is to know about Captain Marvel.

Sent to command an orbital space station, and with Alpha Flight at her disposal, Captain Marvel becomes Earth’s first line of defence against any and all would-be galactic foes, Rise of Alpha Flight catapults its central character, a lifelong soldier, headfirst into the role of cosmic politician. And it isn’t long before both aspects of her character are tested to their absolute limit as she battles aliens obsessed with wiping any trace of the Kree (the race responsible for the Captain’s godlike powers) from the Universe, defends her station from the machinations and intrigues of a would be saboteur and makes her first foray into the murky depths of intergalactic diplomacy while clumsily trying to forge working, and personal, relationships with her new crew. It’s smart, fast and snappy, filled with detailed characterisation and the kind of instant and emotive dialogue that drags you headlong into the story and involves you directly in the plot. Which is probably why my first instinct after finishing Rise of Alpha Flight was to go straight back to the beginning and read it again. And again and again. They were right you know, those old commercials about trying things that, deep down inside, you know you really shouldn’t. All it takes is one hit and you’re hooked…  Tim Cundle