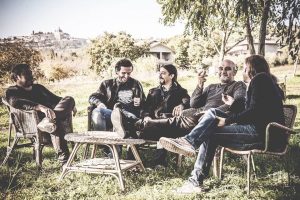 Radiohead – OK Computer:  I think all modern rock and alternative music basically started from this album. The corner stone of modern music as Beatles were a few decades before it. Personally speaking, this was the album that made me stop listening to 70’s rock that I thought was the best (80s did nothing to me): with OK Computer the band did something much better than anything done before.

Sigur Ros – Agaetis Byrjun: For this album and band I could have probably copied and pasted what I wrote about OK Computer. Inspired partly by it, this was the album instead that started another huge movement of modern music. A truly groundbreaking album, something unheard before and that showed that music doesn’t need to be ‘popular’ (be it rap or metal or pop) to go massive. Sigur Ros speak an unknown language that can say much more than any of their peers

Mogwai – Happy Songs For Happy People: This is the album that introduced me to post rock, the classic one. The opening track will always remain in my mind as something completely new: smooth guitar arpeggios, no vocals, rolling drums, a serial and simple music growing up from whisper to wall of sound. Another hugely influencing album and band

Bark Psychosis – Codename Dustsucker: Speaking about post rock, actually the term was apparently invented for another obscure band, Bark Psychosis. Although not for this album, I think Codename Dustsucker showed me how to take post rock and join it with singer-songwriter to create again something new, simple and beautiful. The mature version of Talk Talk Spirit of Eden.

Ulver – Shadows Of The Sun: Possibly one of the darkest albums I ever listened to, is another fine example of what pure art is. A band that moved really away from its metal roots into completely unexplored fields, using dark electronica, layered vocals, slow pace and incredibly beautiful string arrangements

The National – Trouble Will Find Me: A fantastic cover and incredibly simple and modern pop rock singer songwriter music. What I love of this album is that showed me we don’t need another Beatles, we have today equally fine examples of simple beautiful songs, equally rich in unique features and beautiful song-writing craft. A manual about modern simple song-writing.

Soulsavers – The Light the Dead See: talking about modern pop rock music properly written and produced, not for charts but for real art, Soulsavers album collaboration with Dave Gahan (Depeche Mode), sounds exactly how you would expect to sound a duo of DJ’s-producers working on beautifully rich and arranged songs. Add on top of it an incredibly beautiful and powerful voice, and you get the perfect match of modern produced rock album. Yes, coming from DJ’s!

David Bowie – Blackstar: although relatively recent, I know this album changed a lot my way of thinking about how to ‘think forward’. As producer Tony Visconti said, there will be several albums in the coming years that will draw inspiration from this one, and that I think summarise perfectly what I think. Is an album years ahead of its time, in terms of sound, mixing, production, writing, sounds like the future and the past joined to pave a new way. Incredibly beautiful, rough and moving ,is the best testament  ever done. Only a genius could make something like that

Tool – Aenima: I always liked some metal, in particular during my teenage years, but with time I always felt it substantially ‘superficial’ in the meaning that kind of music is supposed to have. Aenima by Tool was instead a complete shock to me. Led Zeppelin reinvented and upgraded to be modern and contemporary. An extreme and extremely well produced album, a truly disturbing one and one of the best gigs I ever saw by three people alone on stage. Another cornerstone album and band that became (rightly) a reference in modern music.

The God Machine – One Last Laugh In A Place Of Dying: I discovered this album thanks to a friend when I was at University in the North of Italy. This friend knew I loved Aenima and thought I might like this obscure band. I don’t know how to describe it, if not like a more mature Nirvana/Tool singer-songwriter music. Obscure, dark and disturbing like Tool, but with a hint of the moving songwriting that its leader Robin Proper-Sheppard will show later with his solo work