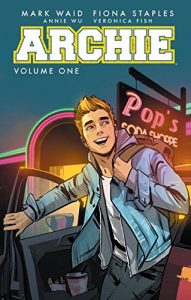 Rebooting and reimagining a cultural and comic icon has got to be one of the most daunting enterprises that any writer and artist will ever face; but being asked to do precisely that to a character as beloved as Archie, the eternal youth from Riverdale who’s longevity would even make Methuselah jealous, well, that’s the kind of terrifying task that would keep anyone awake at night for months on end.  Luckily for us (and by us, I of course mean die hard Archie fans), the creative genii assigned to, and more than willing to undertake and partake in, this venture, the incredible Mark Waid and the always brilliant Fiona Staples have approached and imbued Archie with flair, energy, enthusiasm, imagination and invention and have rigidly adhered to a simple rule throughout the book. If it ain’t broke, don’t fix it. And they haven’t.

Sure, the characters look a little different, but Staples has kept their classic retro feel and just added a little more colour, a lot more detail, and a vibrancy that means the entire cast (Archie, Betty, Veronica, Jughead and Reggie) practically leap off every page.  The stories and the characters -while given a touch of modernity and a nudge into the twenty first century by Waid – maintain a classic, timeless quality to which everyone can relate, whether they’re fifteen or fifty. There’ s no cheap, unnecessary shocks involving narcotic crazed teenagers indulging in orgiastic pleasures of the flesh, just engaging, entertaining story telling that relies as much on its players and their ever constantly changing and developing relationships as it does on plot.  Waid’s Archie is all about break-up’s, new loves, friendships, discovering who you are as you stand on the cusp of adulthood and the seemingly never ending twists and turns that pave the complicated, well-travelled road of the personal and political trials and tribulations that high school forces on everyone. But most of all it’s about the interaction between a group of instantly likeable and incredibly relatable best friends trying to find their place in the world. I’d almost forgotten how amazing, strange and oddly beguiling normal life can be until Mark Waid, Fiona Staples and Archie Andrews opened the door and invited me to join them in Riverdale.  Now I just want to live there so that every day can be an Archie day…  Tim Cundle